Expose those who tried to sell our country

The best way to prevent the Sulu incursion tragedy from recurring is by uprooting the cause of it.

The authorities need to get to the bottom of it by carrying out full investigation on what were the cause of the incursion.

The Sulu people, I believe, had never pulled such a stunt on us.

Except for some piracy raids carried out for financial gains by some certain criminals posing as jihadists from southern Philipines, Sabah was a relatively peaceful place.

So, what triggered the deadly incursion?

This, the government need to thoroughly investigate and disclose to the public.

It needs to be disclosed to the public because there are possibilities that the whole mess was instigated by elements from within our country.

These elements need to be exposed so that we Malaysians are not going to be duped by them anymore. We need to nip such insidious buds to save the country.

I believe these worries are not mere baseless speculations. You may read one here -  An Autonomous Sabah?

As contended, it's not the first time that there are individuals who are willing to sell this country's sovereignty for personal gains.

The history of this country teaches us that every time someone gets greedy for power,  we'll lose a portion of our country. Sometimes it was mind boggling how the sovereignty of the country could be sold off for mere pittance.

It's the same thing which happened to the Sulu people themselves. Their Rulers sold off their land in exchange for foreign assistance to maintain what little power they have left at that time, and now they really have nothing much left.

And yes, they are Malay Muslims, just like those in our country.

Well, who said the Malay Muslims would not suffer the same fate as all those other races such as the native Americans who had either went extinct such as the Aztecs and Mayans, or living a pitiful existence in land reservations in the US or Canada.

The Malays of this country should particularly learn from the tragedy of the Sulu people.

And Malaysians, irrespective of race need to reject selfish leaders who are willing to sell off our country to the highest bidder to satisfy their own lust for power.

There should be no compromise in safeguarding our country's sovereignty.

Maybe today it's just a bit of Sabah being sold off for some extra votes, but tomorrow, it could be the rest of the country. 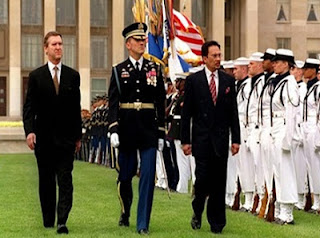 If they can promise the poor Sulu people parts of Sabah, I wonder what may stop them from offering the rest of the country to others with more power and finances to support their quest for Putrajaya.

If these traitors go unpunished, I fear Malaysians will one day ended up being crank pots too.