I had checked with my sources in Ipoh for the latest on whether Kula is really going to contest in Johor.

The reply that I got was that he will do his best to stay put in Perak and not let the cousins have a free hand at running things. 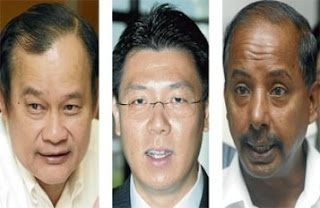 Kula was said to be worried that if he is indeed being forced out of his Ipoh Barat seat, that will spells the end of what ever left of the Indian community's support for the party, not only in Perak, but also in other parts of the country. It is believed that other than Kula, his supporters, in particular the other DAP Indian leaders in Perak will also be sidelined along with him. This will trigger a chain reaction along the DAP's Indian rank and file.

Kula also knows that if he is really being send to Johor, the chances of his political career to survive beyond GE13 will be very slim indeed.

He knows that the DAP's onslaught in Johor will be banked purely on the perceived blanket support of the Chinese community there for the party. Being a DAP non-Chinese leader with a bad track record when it comes to cooperating with DAP Chinese leaders such as Nga and Ngeh, Kula cannot hope to be placed in a Chinese constituency deemed safe for a DAP candidate in Johor.

So, by hook or by crook, Kula will stay in Perak.

(Note : A strong 6.0 magnitude quake hits Taipei this morning. Initial report was that several people were injured in the incident. I immediately contacted my friend Ai who is in Taiwan. She said she is safe.)
Posted by Annie at 13:37