The Perlis crisis has dragged on for one month.

He seems to have lost his Jawa garangness.

Even Umno MTU members are saying this Perlis crisis is a huge embarrassment to the party.

Is Zahid on holiday?

Has he just given up completely?

Honestly, I'm not interested in where or what Zahid is doing.

At the moment, I'm just hoping for him to make way for Hishammuddin and KJ to lead the party.

I got nothing personal against Zahid but I think he should shoulder the same amount of responsibility as Najib for BN's defeat in GE14.

And I don't like the people in his team.

Anyway, that's not what I want to write about for this post.

I actually want to write a bit about Perlis.

I knew Shahidan Kassim quite well when I was living in Perlis for a few years. He was still the MB at that time.

I also met Tuanku Syed Sirajuddin Jamalullai many times when I was there,

Between them, I have to say that I like the Raja of Perlis better. He is nice.

Shahidan on the other hand was rather abrasive and he actually didn't like me very much. But of course, I didn't like him that much either.

For the record, I didn't really like his supposed to be MB brother Ismail too. For one thing, the guy is even less handsome than Shahidan. 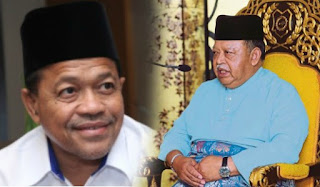 But that's at a personal level.

As to what was referred to as the "Perlis crisis", despite my dislike of him, I actually agree with Shahidan that the Perlis palace shouldn't interfere in deciding who should be MB.

The Umno supreme council members who criticised him over the matter didn't know what they were talking about.

It should be the right of the majority in the state legislature to decide who should lead the administration of the state.

The state legislature is representing the rakyat and the palace must respect that.

Ours is constitutional monarchy, not absolute monarchy.

The practice of the palace dictating who should be the MB and how the MB should do his work must stop.

I believe Dr Mahathir would agree to this.

A state government could become so lame because of palace interference.

A case in point is my home state Johor.

Everyone knows what happened in Johor over the past five years.

No need for me to write more and risk the Sedition Act, okay.

Here is one of the most effective PH campaign pictures for Johor;

The result is that Umno being thrashed in its own birthplace in GE14.

It was not just because of hate for Najib in Johor, okay.

Some may argue that the Sultan and Raja know best and they are protectors of rakyat.

For me, rakyat know best and they can protect themselves.

If an MB and his state government screwed up, it's the people who should kick them out, and not anyone else.

The same with PM and the federal government.