Keeping promises is so overrated these days

So, tomorrow will be the 100th day of Pakatan's rule of Malaysia.

And these are from yesterday,

but no need for apologies

That's quite normal these days.

I also have bad experience with promises.

Sometimes ago someone who once promised to be with me forever had a change of heart and decided that I'm not good enough for that promise.

Told me to accept, smile and be matured about it some more. Bloody painful that one but I did my best to do just that.

Guess, Malaysians need to accept the broken promises, smile and be matured too.

Anyway, I think Pakatan people need to brace themselves for similar stuff from within their own coalition soon.

Also in the news yesterday;

Council of Eminent Persons to remain,


I believe this council is more powerful than the Cabinet and I suspect Dr Mahathir think its members are more clever and reliable than the whole bunch of Pakatan ministers.

I think Dr Mahathir knows that he can't really rely on his Cabinet if he is to continue to run the government.

After that news, I'm actually quite convinced now that Dr Mahathir will not relinquish the premiership to Anwar two years from now as promised.

I think Anwar already knew this.

After all, the guy spent seven years in jail for fighting Dr Mahathir. 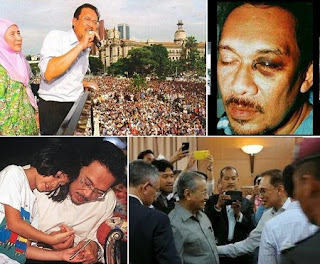 So, the coming PKR elections will be crucial as he will make his first steps to prepare for the show down.

As I previously wrote about the
he will try to get Rafizi as his deputy to replace Dr Mahathir's current blue eyed boy Azmin.

Then he will consolidate his grip on PKR which has the most parliamentary seats in Pakatan Harapan to challenge Dr Mahathir.

Anwar definitely will not sit back and says "Relax, Dr Mahathir already promised to give me the PM post in two years time. Dr Mahathir will surely keep his promise."

Well, considering the value of promises these days as exemplified by what happened to Pakatan's election manifesto, Anwar would be a fool to think that way.

I think even the most staunch Pakatan supporters would have to agree to this.

Personally, on this one, I hope Dr Mahathir will be consistent on his promises - that is he shouldn't keep it.

Not in this case, okay.

I believe Dr Mahathir handing over power to Anwar will be disastrous for the country.

Yes, Dr Mahathir must continue as PM till his last day.

Anwar and his gang may most likely stir up a lot of shit about it but if I'm Dr Mahathir, I would just say that it's just another broken promise, which is not a big deal these days - just like the election manifesto.

No need for apologies too, as Anwar's wife Wan Azizah said about not keeping promises.

Anyway, the handsome old man should learn from the past.

Dr Mahathir should have continue as PM from then till now.

Yup, after the first 22 years, he should have just continued.

Then everyone would have been happy and we would achieve Vision 2020 as scheduled.

Oh ya, that way also there would not be all these pesky broken promises to irritate people like me.