What non-Malays need to know about Malay unity

A friend called last night to tell me that he was worried about the sealed Umno-Pas alliance.

He's worried that it could be the end of a multi-racial Malaysia.

I do understand his concerns.

I reminded him how I was against the whole thing to a point where I got into quite a serious quarrel with some pro-BN bloggers in the run up to GE14.

This is one of my posts from those days,


At that time I still believe that not all Chinese would forsake BN as a multi-racial coalition.

That despite the Chinese tsunami of GE13.

At that time I still wanted the multi-racial BN to remain as it was.

I have never wanted a Malays versus non-Malays fight.

BN as it was ended.

Its non-Malays side was almost totally wiped out.

On top of the substantial number of Malays who sided with Dr Mahathir due to the failure of Najib's team to counter the corruption and other allegations, more than 90 per cent of non-Malays sided with Pakatan.

It was estimated that over 95 per cent of Chinese voted DAP and its allies, which was even more than during GE13.

I have to admit now that I was wrong about the Chinese.

They were already overwhelmingly united under DAP after GE13.

Now, there's no turning back.

The Malays are now doing their own unity drive under the Umno-Pas banner.

The same as what the non-Malays, particularly Chinese did under the DAP banner.

It's proven, even the minority could overwhelm the majority if they are united.

Even more so if they are the majority.

How did it gets to this point?

Actually, it started in the run up to GE13.

For those who are too young, they need to realise that before the current Penyatuan Ummah between Umno and Pas, there was the Penyatuan Cina by DAP.

That's how it started.

DAP went all out on racial issues to win over the Chinese for that general election in 2013.

They even played up religious issues too for good measures.

Just look back at the DAP's campaign videos at that time.

And they succeeded with that Chinese tsunami, wiping out the BN's Chinese-based parties at the polls.

After that, knowing that they needed a certain percentage of Malay votes for GE14, they started a campaign to win over particularly the liberal Malays.

They knew that by then they already have almost all the Chinese votes in their pocket.

With Dr Mahathir leading the Pakatan charge, they got the Malay votes that they needed to get what they really wanted - POWER.

Then they started the move to slowly strip the Malays of what they have.

ICERD, Statute of Rome and other issues.

There were also other things that they did which hurt the Malays.

The turning point for me was when fireman Adib was killed during the temple riot last year.

I just can't forgive them, especially for the way they reacted to the incident.

The last straw for me was the way they tried to justify Adib's death.

And I believe that I was not the only one who felt that way.

The signs of what's coming was clear for all to see at the Cameron Highlands, Semenyih and Rantau by-elections.

It was clear that most Malays are angry.

To make things worse, this Pakatan government has been floundering on almost everything from day one since their GE14 victory.

Stupid statements from stupid ministers day in and day out.

And that's all about it.

To put it bluntly, I believe this administration is the worst since Merdeka.

It lied to the people on its election promises and was not even ashamed about it.

Even the Najib's administration, with all those allegations against it, seemed to have done a better job at governing the country.

And with the supposed handing over of the PM post by Dr Mahathir to Anwar by May next year looming ever larger over the horizon, I can't see things getting any better for Pakatan.

Should the non-Malays really worry about the Umno-Pas penyatuan ummah?

Yes, I think that they should.

But not in the way DAP is trying to make them believe.

There will be no war against the non-Malays as Guan Eng tried to scare them.

It's not the natural way of Malays to bully others.

In fact they have always been welcoming of others.

That's how the non-Malays are here in this country in the first place.

First of all, this cooperation between Umno and Pas, the two biggest Malay-based parties, will indeed sink Pakatan, which was almost wholeheartedly supported by the non-Malays.

The facts and numbers are all there to ensure that.

Yet what the non-Malays should worry about is actually just the lost goodwill between the communities.

Most Malays now know that they had been duped.

They were actually ready to change after GE14 but what happened after Pakatan came to power made them realised that they will eventually lose everything that they have.

It's just like what happened in 1946 when the British colonial rulers tried to force the Malayan Union deal upon the Malays.

That was the first time ever that the Malays were united.

And the end result was Merdeka.

Now, it's the second time they are doing it again.

After the first Malay unification, the non-Malays continue their life peacefully and prosper, especially the Chinese.

The Malays did so too albeit with some difficulties.

I believe it will be the same after this second one.

Really, the Malays just want what are theirs. They will not try to take anything from the non-Malays.

This is the Umno-Pas agreement, 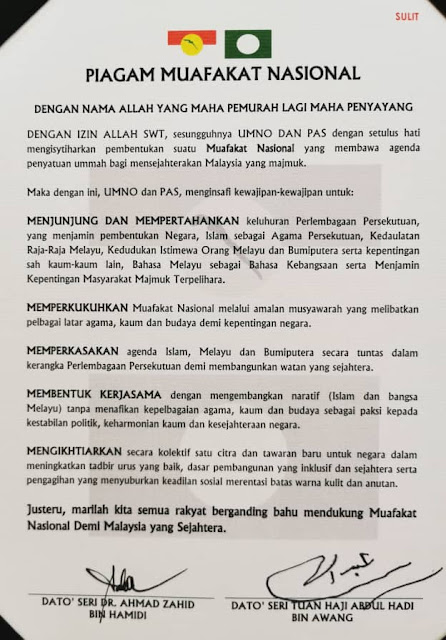 It doesn't say anything about taking away anything from the non-Malays.

As for the lost goodwill, I don't think they should worry too much.

Malays are not really a vengeful lot.

In fact they want to like others and be liked back very much.

They bend backwards for others quite a bit sometimes.

Just so to be liked by those others.

That's just the way they are.

So, I believe things will be back to normal after a while.

By the way, MCA, MIC and other non-Malay based parties are still there on the side of the Umno-Pas alliance.

If they win significant support from the non-Malays in the next general election, I believe they can stand to protect the interests of their communities just like they did during all those years of BN's rule.

So, despite their worries, I don't think the non-Malays should worry too much.
Posted by Annie at 10:07