How the word 'Malay' becomes a dirty word

First of all, I want to thank a reader who responded to my last posting Meroyan kalah pilihanraya which was about former Batu Pahat MP Puad Zarkashi venting his anger for his loss in the recent GE13 by attacking his former mentor Datuk Abdul Ghani Othman.

Actually, being ungrateful is a despised trait in the Malay culture. Those who behave in such a manner were scorned upon by their community. Malay children were inculcated with filial piety as an exercise which encourage them to return the kindness of others'. That was what it used to be among the Malays, at least until quite recently.

Folklores, such as the Hikayat SiTanggang which tells of how a successful and rich son who forsake his mother being turned to stone for his misdeed used to be popular among Malay children.

I however don't think that many Malay children nowadays know that story.
Probably even some of the adults have forgotten the Tanggang story as there appeared to be so many ungrateful Malays these days.

For instance, there are those who feel entitled to whatever help extended for them to be successful in life by the government. They don't think they need to be thankful for such help. They never seem to realize that they would not be getting such help if they are not Malays whose economy as a community is the worst among the country's main races.

But, from where and since when did the Malays learn to be ungrateful?

Well, maybe not all of them were like that, but the number appears to be growing.

For every issue affecting the Malay community's interest, there will always be those among them who turned against their own people.

In such cases, first there will be a self-hating ungrateful Malay, and then there will always be another supporting him, and then another and another....until it will reach a point where 'Malay'  becomes a dirty word equivalent with words such as 'racist' and 'bigot' even among the Malays themselves. 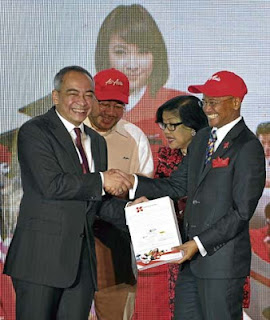