Malays who will cause Malays extinction

If the current political climate continues, I think the Malays will probably be extinct soon and those responsible for turning that race into just a museum exhibit will be they themselves. 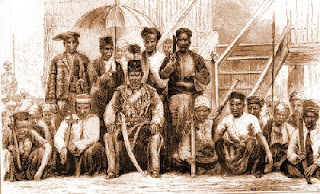 So, before I go to sleep tonight, let me reflects on what I think could be the 10 types of Malays who will cause the demise of their race in not too distant future.

1. Selfish Malay leaders who only care about their own personal interests.

2. Stupid Malays who blindly follow their selfish leaders who actually only care about their own personal interests.

4. Shallow Malays who hate themselves for being Malays.

5. Shallow self-hating Malays who want to be Arabs, Mat Salleh or of any other race.

6. Crooked Malays who were groomed to be big time corporate leaders but instead turned into big time conmen.

7. Intellectually stunted Malays who think they are already very smart and that their race is already on par with other races after they graduated from places such as UiTM, UPSI etc.

10. Malays who read Harian Metro and nothing else.

Do note that lazy Malays are not in my list. I have my theory for that but I will write about it some other day.