*For those who do not know the meaning of meroyan, please ask your Melayu friends.

Okay, I actually read this article in Utusan just now and had a hearty laugh.

I never thought an idiot could be so funny. 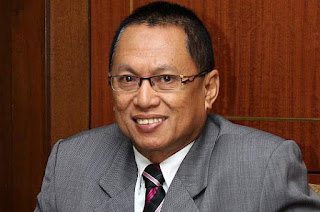 I know most of you all don't have time to read the entire story at that link. So here are the highlights and a bit of what I think about it,

Me: Puad, the former deputy education minister apparently still can't accept  that he lost his BP parliament seat and now out of the Umno's mainstream. Of course he needs to blame someone else for it. Well, looks like he is still sore that the Johor Umno liaison committee headed by Datuk Ghani had advised the Umno HQ to drop him as a candidate followings feedbacks about Puad in Batu Pahat  being very bad. He had however managed to bypass that recommendation by throwing tantrum in KL a day before the BN list of candidates was announced. Puad contested and lost the Batu Pahat parliament seat, which is the only Malay-majority parliamentary constituency that BN lost in Johor.  The other four which BN lost were Chinese majority Bakri, Kluang, Kulai and Gelang Patah. Anyway, I guess Puad just can't shut up and wait for the due process of Johor Umno's power transition by attacking his former mentor (He got his first real break into politics after Datuk Ghani appointed him as his political secretary). Or maybe it's  just that he  wanted to cosy up to the new Johor Menteri Besar in the hope that he could remain relevant after the electoral defeat.

Me:  Johor BN is indeed weakened by the Chinese tsunami but Johor Umno is still relatively strong. Umno only lost in Johor where there were infighting among themselves such as in Sungai Abong and Maharani and where a poor candidate was fielded in Batu Pahat despite advise against it by the State liaison committee.

Me: Actually, Khaled can have that Johor Umno chief post anytime he wants now. Datuk Ghani is just not the type who cling on to such post. This was confirmed by the PM himself when he told everyone during his visit to Johor just days before GE13 that Ghani had actually wanted to retire and not even want to contest at all during the election. It's just a technical thing about Datuk Ghani being still the Johor Umno chief. However, bear in mind that Umno, being a Malay party have the adab sopan and do things accordingly. Orang Melayu tak terajang keluar ketua keluarga dari rumah bila nak tukar ketua baru. Those who do that are called orang biadap or kurang ajar.  But I guess, someone like Puad doesn't really understand such things.

Me: I actually know who are the two or three "advisors" Puad was talking about. These are people who sticked with Datuk Ghani through thick and thin unlike Puad who abandoned his post as the MB's political secretary in the 2004 general election because he was not named as a candidate.  Or does Puad want Datuk Ghani to have a  lot more "advisors" and "consultants" like those at the Umno headquarters in KL?. The Johor Umno's  GE13 campaign actually  started in earnest two years ago with Datuk Ghani going to the grassroots level during his several series of lawatan peti undi. Unlike BN MPs such as Puad who only do real work at their constituency  just before the election, Datuk Ghani had done so, much earlier in advance with divisional chiefs being instructed on what to do when the actual campaigning period started.

Me: Azalina Othman Said and the other Umno candidates in Pengerang won their seats with comfortable majority. The Rapid issue got nothing to do with Johor BN almost losing its two third majority in the State assembly. Well Puad, you should know that the real problems faced by Johor BN in GE13 are actually just the Chinese tsunami and idiotic Umno leaders who refused to accept the fact that they are lousy leaders who have been rejected by the people but do not know when to just shut up.
Posted by Annie at 11:47