Brainwash the Chinese, dupe the Malays

It was concluded that less than 10 per cent of Chinese in this country supported BN in GE13.

Among this less then 10 per cent is Chuah Bee Kim, a Johor Baru-based journalist.

I concluded that, based on her reports and blog postings during the election.

Here is one of her article which I reproduced in this blog,
Chuah Bee Kim writes about Ghani

What makes Miss Chuah's support for BN unique was that she is a totally an apolitical person. I conclude that based on what I read in her blog prior to the campaigning period of GE13.

I believe that she decided to support BN because she saw the good things done by BN and in particular the good self of the former Johor Menteri Besar.

When it turned out that the overwhelming majority of Chinese voters turned their back at BN, Miss Chuah had written in her blog that there are still others like her who appreciate the moderate ways propagated by BN which had enabled the country to progress over the past half century.

One of her recent postings which caught my attention was an article about a unique Chinese family,
Life as a Chinese Muslim convert

However, among the comments received at that posting was this sarcastic remark from one whom I believe is a DAP cybertrooper,

What a nice story and I wish their family well. Maybe you could follow up this story with the story of a family that coverts to another faith from Islam. The tolerance that society shows them as they take away their children and lock them up indefinitely and even threaten them with the death penalty unless they come back to their senses. Or maybe a story of how a grieving family has the body of their loved relative taken from them for an Islamic burial where they were unaware that they had converted. Yes, Islam in Malaysia is all about tolerance and respect for other races and faiths.


I concluded that it was a comment by a DAP cybertrooper because I had received similar ones which condemned my mother who is also a Muslim convert,


Miss Chuah is a Chinese and devout Buddhist. She made that clear in her blog postings. That was what made her writings about the goodness of the Chinese Muslim family a big offense among the DAP people such as that commenter.

For them the Chinese must not be portrayed as sharing any genuine similarity with the Malays, especially in faith and be happy about it.

For the DAP, the Chinese must be perpetually convinced that they were being prosecuted by the Malay Muslim majority and that they are suffering hardship all these while because of policies of the Malay-led BN government.

That was what had been drummed up by DAP cybertroopers over the past five years leading to GE13. It was a successful campaign by them resulting in the overwhelming support of the Chinese community for their party.

The other issues brought about by DAP and its allies were actually just to obscure this most insidious tactic of racial incitement by them.

As for the overtures made by the DAP to their Malay muslim allies, those were in reality merely window dressings. 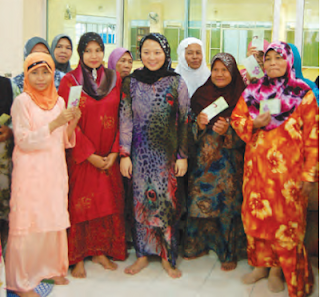 Seriously, do you all think those makcik-makcik and adik-adik posing with the tudung clad Hannah Yeoh for the picture really think that she is mendekati Islam?

The answer is actually YES.

They really believe that Hannah the evangelist will indeed one day embrace Islam and be one of them simply because she wear baju kurung and tudung for the occasion.

If they are voters in Subang Jaya, they would had indeed voted for her.

It's also the same thing that happened to the Singaporean Malays here, 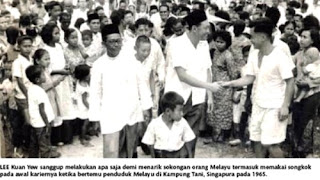 A simple act of wearing a songkok is sometime enough to fool them.

Yes, Malays can be that gullible.

A lot of them nowadays genuinely believe that DAP and its allies really care for them as Malays and Muslims.

Unfortunately, they will only realize their gullibility when it is too late for them to do anything about it.

Till then, the story of brainwashing the Chinese and duping the Malays continues.
Posted by Annie at 13:52