The Pakatan people have apparently not given up hope on taking over Putrajaya despite them losing the GE13.

Their leader, DS Anwar Ibrahim had announced that a massive rally will be organized in Kuala Lumpur on June 15.

Anwar had been going around the country since the end of GE13 to get support for his claims that the election was won by BN courtesy of electoral fraud.

It should be noted that Anwar and his supporters, including the DAP and Pas leadership were only claiming fraud in constituencies where they lose, and not where they won.

It's quite clear now that no amounts of persuasion that the election was conducted in a free and fair manner could sway them and their followers.

Even Yang DiPertuan Agong's advice for them on the matter was rebuffed. The King was even insulted and vilified in the social media when he suggested for all quarters to accept the results of the election and respect the country's democratic process.

There is now no doubt that the Pakatan's rally will proceed as planned.

It may even be the start of a new series of rallies aimed at toppling the rightfully elected BN government.

How things will develop, I believe depend on the authorities' action.

Is it going to be the soft or hard approach?

Prior to last year, the authorities had not tolerated such nonsense. They replied to acts of public disorder by deploying the FRUs and water cannons. The rallies turned into riots and were given wide coverage by the foreign press and pro-Pakatan media networks.

The authorities were then portrayed as being authoritarian and undemocratic.

The government, trying hard to project a moderate image, then shifted to the soft strategy by abolishing the ISA and relaxing the laws including those governing public gatherings in the hope of winning the perception war.

The first soft approach towards Pakatan-organised rally was the anti-Lynas protest in Kuantan in February last year. Even a few days before the rally, the police had issued a statement that they will not use force to break up the rally. It resulted in a massive turn-out. The most significant aspect of it, was that the rally was dominated by Chinese protesters. It was the biggest Chinese dominated protest in the country since 1969.

The authorities' soft approach continued after that and the turn-out at the Pakatan's rallies became bigger and most significantly there were more Chinese among them.

Prior to that, all Pakatan rallies were dominated by Malays, particularly the hard core supporters of Pas who were always on the front line braving the FRU's tear gas and water cannons. It is jihad for them.

All Pakatan rallies after the anti-Lynas protest were relatively without incident as the authorities were bending backwards to avoid antagonizing the protesters.

Even during the Bersih 3.0 rally in April last year when violence did occurr, it was the Pakatan supporters who started it after they broke the police barriers at Dataran Merdeka.

Again, it should be noted that those involved in the violence were mostly Malays. 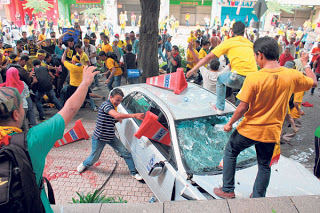 The Chinese protesters were mostly far from the flash points, gathering at Petaling Street or Jalan Bukit Bintang.

It should also be remembered that no serious action were taken against those who assaulted the policemen and civilians during the riotings. The authorities were trying very hard to show themselves as being tolerant and lenient.

Personally, I believe this soft approach by the authorities have only embolden the Pakatan people.

They feel that they can get away with anything now. They don't feel that it was wrong to break the law.

They don't feel that it was wrong to utter all those inflammatory and seditious statements to whip up the people's anger towards the government.

Everything is okay for them as long as they could get the desired number of people going to the streets with them.

I believe it is now the time for the authorities to act decisively to stop them.

Those who break the law must face the consequences.

The time of being soft and accommodating is over.

If the authorities continue to bend backward to please these law breakers, then without doubt, we will have to go through another five years of political nightmare.
Posted by Annie at 13:19