I had initially planned to write about cases of corrupt business journalists tonight, but at the moment is not feeling very well.

My chest pains are back. I had taken my medication and applied some minyak Yu Yee on my chest and tummy just now. 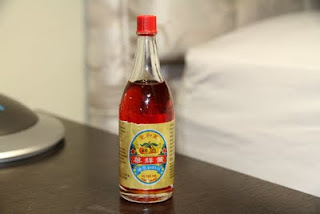 I know, I'm supposed to boycott products such as the Yu Yee ointment but I'm so used to it since I was a baby.

Well, I'm feeling drowsy and in no condition to write too much.

However, since I don't want to disappoint, I'm instead providing the link to this posting on the same subject that I had wanted to write. It's by former MP Wee Choo Keong,

By the way, BK Sidhu is the Star business journalist who is the darling of some prominent Umno bloggers for her "heroine" role leading to the concerted attack to demonized former Securities Commission boss TS Zarinah Anwar three years ago.

She had then raised to the status of a diva in the rank of the subtly pro-Pakatan Star newspaper.

Well, based on what Wee Choo Keong wrote, he doesn't seem to have too high regard for BK Sidhu or the newspaper she is working for.

They are, to Wee, just some lapdogs of the scheming Malay-bashing AirAsiaX bosses and their self-hating super liberal Malay axx-licker who is now their mascot to sell the airline to especially other Malay-hating people.

Here is the advertisement in that backstabbing the Star newspaper which is actually AirAsia X gesturing the middle finger at the Malays. 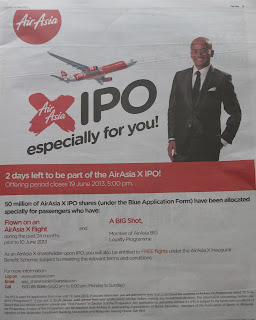 They purposely put the picture of that self-hating botak Malay piece of crap there to encourage other Malays like him and Malay-hating non-Malays to buy that airline's shares.