Sime Darby is in good hands

I read with not much emotion the announcement of Datuk Abdul Ghani Othman being appointed as the new Sime Darby chairman.

While it is nice to know that Datuk Ghani is being appreciated by the government for his long service as a Johor menteri besar and his personal sacrifices, including the unsuccessful attempt to stop the Chinese tsunami in Gelang Patah during the GE13, the appointment was not something which really took me by surprise.

Talks about Datuk Ghani assuming the post had actually started even weeks before GE13. Personally, I feel that it's only natural for the government to appoint someone with Datuk Ghani's experience of managing one of the most economically vibrant states in the country to helm such a conglomerate. His clean track record should be another factor which made him the most suitable candidate for the post.

Amidst all sorts of speculations about where Sime Darby will be heading following this appointment, I'm confident from what I know of Datuk Ghani, that he would accept the appointment as just another task which he needs to fulfill, the same as when he was assigned to look after Johor 18 years ago and also when he was asked by PM DS Najib Razak to try to stop the DAP's racialist campaigning by standing against Lim Kit Siang in the Chinese-majority Gelang Patah constituency less than two months ago. 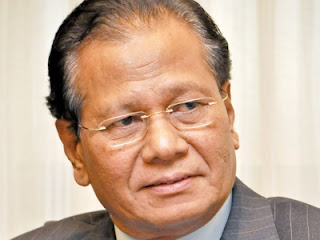 And based on what I know of him, Datuk Ghani will do his best to do the job and accept it as an amanah from the rakyat.

The last that I checked, Datuk Ghani will be coming to Sime Darby on his own, and accompanied only by his long serving private secretary, the same way that he did when he became the Johor menteri besar many years ago. He is not the type who brings along an entire entourage wherever he goes. If there are any of his people from the previous Johor administration coming to join him, that will be later and depending on the needs.

No one in Sime Darby should fear for their job being taken over by Datuk Ghani's people as such thing would never happened. Only those who don't do their job well have to worry about such things. Anyway, Datuk Ghani doesn't have that many people, as I can actually count them with my fingers. It should also be noted that they are mostly low ranking officers who will not be much of a threat to anyone in the event that they are actually to be absorbed later into the Sime Darby's structure.

Meanwhile, Datuk Ghani's appointment to his new post was greeted with all sorts of reactions, with the most interesting for me from the political angle being this comment at Chuah Bee Kim's congratulatory posting for her former MB,
Congrats to Ghani

/  June 24, 2013
This is the man during his stewardship of Johor State always and almost bend backwards to help the Chinese Community. The new land to the schools, the land titles extension, the allocation The status of the Chingay He asked the Majlis to help clear the tons of rubbish strewn and left haphazardly behind after the Annual chingay To pay back the mainly Chinese as well as other investors of Dana Johor even though they were paid dividends and also were told about the risk (The DJ was mostly subscribed by the Chinese).Help Chinese companies like Lim Kang Hoo gets thousand of acres of land in KT, helped many developers like KSL and JCChang gets green lane and fast approvals to their projects. He always had no qualms and no barriers to Chinese people who approached him, at home, in the office, on the road , in the stalls
Then when the ugly hag Kit Siang came from Ipoh , spews hatred and jealousies and sow the politics of hatred, the whole Chinese people en mass rejected the soft and accommodating approach of Ghani Othman and voted in Kit Siang with a clear and impressive majority
So we saw also to our utter dismay, the MCA was shredded. JB , Skudai, Senai, Kulai, Kluang Batu Pahat,Muar, all the major urban areas with impressive facilities made by Ghanis policy . Where in areas the Chinese voters were more than 45%, the Malays couldn’t stop the Tsunami and all the areas the seats went to Rocket and its cohort
What Ghani had done to accommodate, to nurture and to approach these Chinese people were all of no bloody good to them and only the Rocket and UBAh became their calling
How bloody ungrateful people these bunch of people are.

I guess, the hurt lingers for some people....and that includes me. I will try to heal myself but I don't think I will ever forget that night of May 5.

Well, Datuk Ghani, if you are reading this, all the best with your new job and take care of your health. Hope to see you again one of these days.
Posted by Annie at 18:15