Most of my Chinese friends are Pakatan supporters, or to be more precise, they are DAP supporters.

Their political stance is more or less the same - The Malay BN government only care for the Malays and discriminates the Chinese and other minorities. It is also corrupt and ineffective. As for the non-Malay members of the BN government, they are regarded as just running dogs of their Malay colleagues from Umno. MCA = Chinese running dogs, MIC = Indian running dogs, etc.

Of course they don't openly talk about the Malay stuff as that would make them sound like racists. Normally they would masked the "Malay" word with the word "Umno". But, sometimes it just still slips through. I would normally listen to their rants without saying anything.

I actually understand why their political inclination is such.

Basically, they just can't stand being governed by the Malays whose community is in their eyes of lesser quality then that of their community. The part about corruption, poor governance, flip flop decision making process etc, despite to a certain extent being true, were just the usual camouflage to what is deep inside their actual perspective of the BN rule.

Ask any honest Chinese person and they will readily admit that they think the Chinese community is of a better quality than the Malays'. They have a better work culture, better financial management, care more about their children's education, etc. And I don't fault them for thinking that way. To a certain extent, I do agree with them that the Chinese are better in a lot of things compared to the Malays.

But of course, the Chinese are not better than the Malays in everything. Every community has its advantages and disadvantages. However, it's just not productive to go tit-for-tat every time we want to discuss this, so I just rather not do a comparative study on the subject between the Chinese and Malay communities in this short posting.

Occasionally, when I'm in the mood for a bit of argument, I would asked them back whether their life is so bad in this country that they make it sound that this country is governed so badly that we are on par with Zimbabwe or that the minorities here are treated as bad as the blacks in apartheid South Africa of yesteryears. After all, that's what the DAP leaders had been labeling the BN government's affirmative policies - apartheid. DAP sec-gen Lim Guan Eng and Johor DAP chairman Dr Boo Cheng Hau are among those who had used that terminology to describe BN's policies.

The usual answer that I got from them when I passionately asked those questions would be in the negative.

Anyone can have a good life in this country if they work hard enough to get it. That, they have to agree with me, as they are the living testimony to that.

But, of course my friends would not want to admit that without a fight either, thus they always added that this country could be much more than what it is now.

And for dramatic purposes, they would further add - "We could have been like Singapore."

Ok, at that point, I would normally start laughing.

Honestly, why would I want this country to be like Singapore? I rather Malaysia be like Maldives, for heaven's sake. Nice beaches and more fun, don't you think?

Well, actually I would be laughing because this Singapore bit reminds me of my Pa and Ma whenever they argue about politics. Singapore is my mother's last line of defense when my father cornered her and made her admit that her life and those of her family are actually better than those of his and his family despite all those BN affirmative actions. (As I had mentioned in an earlier posting, my mother is a Chinese while my father is a Malay)

Normally, when my mother starts talking about Singapore, my father just make a funny face and let her carry on with it as he knows that's the limit to the argument. I know he loves her very much and for that he lets her win. He would tell her to stop giving him a headache and just vote for DAP when it is election time. As for himself, my father never bothered to vote at all, which reason is still a mystery to me till this day.

Whatever it is, I do notice that my Chinese friends, as it is with my mother, always without fail never address the whole issue of how it's going to be once Pakatan, consisting DAP, PKR and Pas rules this country.

They also conveniently forget that these non-Chinese elements of Pakatan may have  their own agenda on the side and they would work on it once they come to power.

If DAP is now feeling strong because the about 30 per cent Chinese are united under its leadership, then just wait until the almost 60 per cent Malays unite under Pas after the demise of Umno. 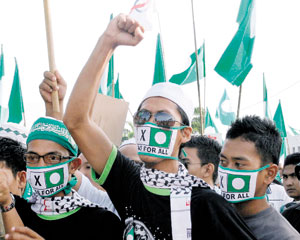 Do the Chinese of DAP honestly think that the Pas people love their Chinese way of life so much better than the Umno people?

OK, some may say that the Chinese in Pas-ruled Kelantan and Kedah seems to be fine. Well, they are by percentage very much lower than those at the national level so that they are not feeling the heat much. Do wait until the Pas-DAP game is already at the national level. I am quite sure things will not be so rosy by very much in the new Pakatan federal government.