Johor will have a new Menteri Besar (updated)

The Sultan of Johor is expected to agree to the dissolution of the State assembly today (April 4).

Outgoing Menteri Besar Datuk Abdul Ghani Othman has meanwhile been on the ground since yesterday to rally the Johor BN troops for the final push towards the polling day. He is not expected to take a break from his schedule today despite the confirmation that he will not continue as MB.

Sources close to Ghani indicated that members of the Johor Umno leadership are committed to remain united behind him until his tenure ends at the appointment of his successor after the election.

Johor will have a new menteri besar after the coming GE13.

Sources within Kota Iskandar nonetheless said Ghani, who has been preparing and fine tuning the Johor Barisan Nasional machinery since right after the 2008 general election will lead his team into the electoral battle before relinquishing his party and government posts.

It is however not yet clear whether Ghani will instead contest a parliament seat which in this case should be Ledang where he is the Umno division chief.

Ghani who will be 67 on Nov 14 this year is the longest serving Johor Menteri Besar, holding the post since 1995.

Under his tenure, Johor has developed into the most important growth area of the country with the introduction of the Iskandar Malaysia development region and other major economic projects such as the mammoth petroleum hub in Pengerang which is his brainchild.

Development of the rural areas has also not been neglected and among Ghani's most significant achievements was the construction of over 5,000 kilometers of village roads throughout the State via Kumpulan Prasarana Rakyat Johor which otherwise would not have been able to be completed beyond 2020. 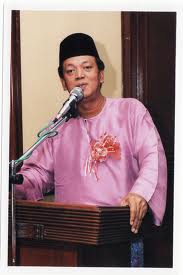 Othman, who is a businessman by profession is said to be the preferred choice of the Johor palace.
Posted by Annie at 23:43