I have to admit that I don't really know Johor DAP chief Dr Boo Cheng Hau, who is defending his Skudai seat in this general election. 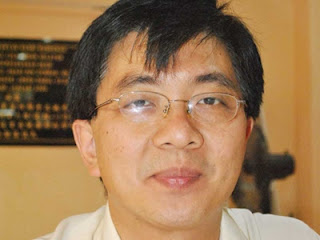 From what little I previously heard about the man, I had concluded that he is a hardworking wakil rakyat and quite principled for standing up to DAP sec-gen Lim Guan Eng, causing him to be mostly sidelined by the Lim family who reign supreme in the party.

When Dr Boo was still named as DAP's Skudai candidate, I had concluded that he survived the chopping block like what happened to the other DAP assemblymen of Senai, Mengkibol and Bentayan simply because party supremo Lim Kit Siang still need him to work for the Gelang Patah campaign.

By the way, in case you all are not aware, the dropped DAP assemblyman of Mengkibol is going to defend his seat as an independent candidate. That, I will elaborate in another posting if no one else are interested to write about it.

Back to Dr Boo, I had always been under the impression that he is an intelligent person and sincere in his struggle with DAP based on what I heard of him so far.

The only blemish on him which I could recalled was when he accused BN of propagating an "apartheid administration system" by sidelining the non-Malays. I had however attribute that line of thought of Dr Boo to the campaign waged by the DAP leadership to depict the BN government as a Malay administration which practices discriminatory policies against the Chinese.

I had believed that Dr Boo was just trying to toe the line when he accused the BN of being racist. Otherwise, he may not withstand the pressure put on him by the Lim dynasty.

Other than that, I thought Dr Boo is an ok guy, especially when he stood up against Johor PKR chief DS Chua Jui Meng, the MCA reject man.

So, it came as a huge disappointment for me when I listened to his speech at a DAP gathering in Taman Sutera, JB last night.

His speech which was mostly delivered in Mandarin was peppered with stale and childish accusations against BN.

Dr Boo among others talked about Malaysia's submarines not being able to submerge causing the recent intrusion of Sulu gunmen into Sabah. He said the Sulu gunmen had managed to avoid being intercepted because they can see the submarines floating on the surface as they are incapable to go underwater.

Apparently Dr Boo failed to remember that his party's secretary general had once given a ride in one of those submarines and had experienced it diving under the surface of the sea.

Then Dr Boo talked about how Pakatan will send DS Najib Razak as Malaysian ambassador to Mongolia in an apparent reference to the Altantuya case where the opposition had been trying to convince the people of Najib's involvement. Dr Boo was actually trying to be cute but I think he failed miserably in that case. It was so lame of Dr Boo for trying that stunt.

And with that, I think Dr Boo has sunk into gutter politics just to please Kit Siang for the survival of his political career.

Honestly, I don't think so highly of Dr Boo anymore.