Saving a bridge at Gelang Patah

As I hunkered down with others for the defense of Gelang Patah now that the battle line is drawn, I feel like I'm in that war movie Saving Private Ryan

I feel like a character of one of those American soldiers who were defending the small French town about to be overrun by the German forces at the last battle scene of the movie. 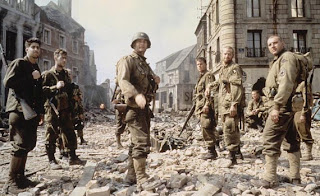 The mission of the American soldiers in that last battle scene was to save the bridge at the edge of the town which if fell under the control of the German forces would caused dire consequences.

In the case of Gelang Patah, the bridge is the bridge which connects Malaysians across the racial divide. It must be saved at all cost.

Now that Datuk Abdul Ghani Othman is leading the defense of the constituency, those who are with him need to be ready to sacrifice personal interests for the battle to be won.

On the other side are formidable foes who will stop at nothing and throwing all their resources to defeat us.

Their most lethal weapon is the racial card, the very thing which they intend to use to destroy the bridge of racial unity in this country so that they can gain power over all of us.

They will try to sway the Gelang Patah folks, particularly the Chinese majority of that constituency to support them by appealing to their sense of ethnic identity.

As it is in every battle, there will be casualties.

I am already suffering some "injuries" as I'm already being sidelined from my post and accused of not doing my job because of whatever little I'm doing to help Ghani.

But I don't regret it. I'm not some sort of heroine or martyr but I believe I'm doing the right thing.

I am not sure of the outcome of this battle, but one thing is for sure, Ghani and the rest of us who are with him down here will fight till the end.

We may lose the battle as the odds are against us but we surely are not going to let Kit Siang and the gang have it easy in destroying our country's racial unity.

It's now for the people of Gelang Patah of all races to decide whether we will be successful or defeated.

All we can do now are to put up a good fight and pray for the best.

p.s In that movie, the main character Captain John Miller died, shot by the very German soldier whose life he spared in an earlier skirmish. But the bridge was saved.