JOHOR BARU: Johor Barisan Nasional chairman Datuk Abdul Ghani Othman will lead the coalition's defense of the State by contesting the Gelang Patah parliament seat against DAP supremo Lim Kit Siang.
Ghani's candidacy was announced along with other Johor BN candidates at the MSuites Hotel this morning.
The announcement of Ghani's name as the BN's Gelang Patah candidates was greeted with thunderous applause and cheers from those in the packed hall. Ghani, 66 will face of Lim, 72 in a much anticipated contest which analysts had predicted will determine the future of the country's race relations.

Gelang Patah is a constituency of 106,864 voters consisting 52.4 per cent Chinese; 34.3 per cent Malays; 12.5 Indians and  0.8 per cent of other races.
In his speech before the announcement was made, Ghani called on the BN candidates to do their best to ensure the coalition victory.

"We must persuade the people of Johor to reject the attempt by the opposition to disrupt the way we Johoreans are doing things.
"We must defend our ways of sharing and cooperating between people of all races which has brought about progress and stability.
"The people of Johor must tell these people who either come from Kelantan or Ipoh that we reject their politics of divisiveness," he said in reference to Lim, who previously is the member of parliament of Ipoh Timur and Pas vice-president Salahuddin Ayub, the former MP of Kubang Kerian  who will also be contesting in Johor.
It was also announced that High Education Minister Datuk Seri Mohamed Khaled Nordin  who is formerly the Pasir Gudang MP will contest the Permas state seat which many believe will pave his way to replace Ghani as the new Johor Menteri Besar.

So, the big fight in Gelang Patah is on.

For me, it is not really so much of just a fight between DAP supremo Lim Kit Siang and outgoing Johor Menteri Besar Datuk Abdul Ghani Othman. 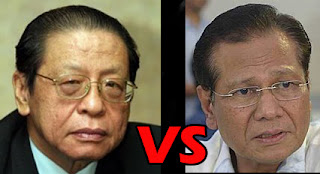 It's bigger than that.

It is a fight between racial chauvinism and Malaysian unity.

It is going to be a struggle between those who want to use our ethnicity to further their political agenda and those who are trying to defend the Malaysian multi-racial but united way of life.

It will be a contest like no other in Malaysian electoral history.

The outcome of the contest in Gelang Patah will decide the future of Malaysian racial relations.

Kit Siang will go down to the ground banking on the fact that out of the 104,000 voters in Gelang Patah, 53 per cent are Chinese.

Ghani's mission in Gelang Patah is to stop Kit Siang from splitting Johoreans along racial line.

He will go there with the belief that the Chinese of Gelang Patah are not racist chauvinists and that they will remember the good things he had done as a Menteri Besar for 18 years, particularly the development that he initiated in that constituency.

Ghani is going to the ground with the belief that the people of Gelang Patah, especially the Chinese will vote for him because he is the better man and with a good track record as a leader. He believes that they will see past him being a Malay.

Still, on paper, everything pointed that Kit Siang will win and that it will be an uphill task for Ghani to stop him.

But, knowing Ghani, he will try his best not to let the 72-year-old ends the dream of a truly united Malaysian society.

The people of Gelang Patah, particularly the Chinese community have been given the privilege to decide once and for all whether we as Malaysians will stay united or be split forever by the color of our skin.