As the focus of most political observers in Johor are on Gelang Patah where DAP supremo Lim Kit Siang is hoping to galvanize the Chinese voters to start a "revolution" in Johor, another big battle is shaping up in nearby Pulai. 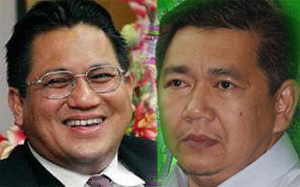 Salahuddin who hails from Pontian is a two term MP of Kubang Kerian, Kelantan. He is expected to also contest a State seat, probably Nusajaya, and was tipped to be the probable Pakatan's Johor MB in the event Pakatan managed to wrest Johor from BN.

The following are electoral track records of both Jazlan and Salahuddin.

Bear in mind that Kubang Kerian is an outright Malay majority constituency while Pulai is regarded as a racially mixed constituency.

Based on their rack record, Jazlan definitely seem to be more politically solid than Salahuddin.

Jazlan obtained 83 per cent of votes in Pulai when BN was at its peak in 2004 while Salahudin won in Kubang Kerian with just 56 per cent votes.

When the BN's fortune turned the other way around in 2008 following the so called Pakatan's tsunami, Jazlan's majority was reduced with him receiving a smaller 69 per cent votes in Pulai. However, that percentage was still higher than the one recorded by Salahuddin in Kubang Kerian where the percentage of votes he received increased to just 61 per cent.

Before I proceed any further, it must be noted that Pulai, where the duo will cross swords now has slightly over 100,000 voters whose racial composition comprising 47 per cent Malays, 41 per cent Chinese, 10 per cent Indians and 1 per cent other races. The number of voters in the constituency has almost doubled since 2008. I believe it is due to the rapid development of the area which is part of the Iskandar Malaysia initiated by the BN government.

I have to admit that I'm not an avid fan of Jazlan due to his overly liberal views but I believe he is a good MP. He consistently works with the grassroots in his constituency and nobody can accuse him of not doing his best for the constituents there.

The fact that he is a Sino-Malay also helps as this enable him to "connects" with his Chinese constituents. Jazlan, despite being officially a Malay never hide his Chinese ancestry and in fact is proud of it. Very much like myself, his father is a Malay of Javanese heritage while his mother is a Teochew. My only complaint about Jazlan on this point is that he only manage a passable Mandarin. Well, maybe his mother is not as garang as mine thus he was not forced to properly learn our Chinese mother tongue. Anyway, I hope he will one day has the privilege of learning them.

As for Salahuddin, I'm not really sure how he is as an MP. I know that he was the opposition whip in parliament, but as for his services for the Kubang Kerian people, I never really heard anything about it. I am also not very sure about the development taking place in Kubang Kerian as the most that I know about such things there is that it is where the USM hospital is located.

I had heard rumors that Salahuddin is also a Sino-Malay. It was said that his father is a Malay while his mother is a Chinese. I had tried to get a confirmation on this but was unsuccessful.

Perhaps, those who are more knowledgeable about Salahuddin's ancestry and his track record as an MP could enlighten readers of this blog in the comment section.

This battle between Jazlan and Salahuddin would be as interesting as the one Lim Kit Siang is going to have in Gelang Patah as the result could determine the future of Pas' attempt to breach BN's defense in Johor.

What is obvious though for now is that Pas' attempt at launching their main assault on Johor in a racially mixed constituency of Pulai was due to their lack of confidence in getting the support of the Malay Muslims of Johor.

Also bear in mind that the Nusajaya state seat Salahuddin is said to be contesting is also a relatively mixed constituency of slightly over 50,000 voters consisting 48 per cent Malays, 38 per cent Chinese, 13 per cent Indians and less than one per cent of other races.
Posted by Annie at 15:43