Ghani: Vote to ensure govt made up of all race


Buried deep inside the NST on Sunday was this story. I'm putting it here so that readers of this blog may ponder on it. 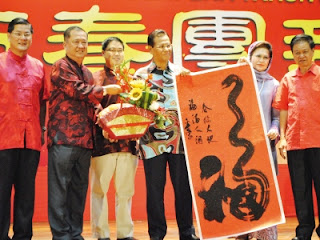 JOHOR BARU: Multiracial Malaysia will face an uncertain future if the outcome of the next general election resulted in a government dominated by members of just a single racial group.

Johor Menteri Besar Datuk Abdul Ghani Othman, in expressing his worry over the possibility of such a scenario, urged Malaysians of all races to vote wisely when choosing the next government.
"It would be unfortunate if the coming general election should result in a government constituted of members of a single community. We would not want the others to be alienated based on which community they belong."
Ghani was speaking at the Vaisaki celebrations open house organised by the Johor branch of the National Council of Malaysian Sikhs Association here yesterday.
While stressing that support for the government must come from all communities, he said Malaysians must resist the political inclination which could lead the country to be more racially polarised.
"It would be a very sad thing should it happen in our country, and in particular in Johor."
Political analysts had previously pointed out the possibility that the over dependence of the opposition on the Chinese community's support may result in the community not being represented in a BN government.
Later, asked by reporters on speculation that he may contest against DAP supremo Lim Kit Siang in Gelang Patah, Ghani said matters related to BN's candidacy would be decided by the leadership of the coalition.
He said Johor BN's proposed candidates had been submitted to the coalition's headquarters in Kuala Lumpur and the decision on who was to be fielded would be announced by coalition chairman Datuk Seri Najib Razak.

Read more: Ghani: Vote to ensure govt made up of all races - General - New Straits Times http://www.nst.com.my/nation/general/ghani-vote-to-ensure-govt-made-up-of-all-races-1.249946#ixzz2PpIH228u
Posted by Annie at 08:36