My mother is angry with Guan Eng

I was yesterday told by mother to read an article by pro-Pakatan Malaysian Insider but only managed to do so just now.

Her only comment about the article was "How can Guan Eng be so arrogant and childish..."

Only after reading the article that I understand why my mother was unhappy with Guan Eng.

My mother had met Ghani and despite being a staunch DAP supporter, she thinks that Ghani is a good man who has done a lot for Johor.

Based on the Malaysian Insider report, the way Guan Eng as Penang chief minister attacked Ghani in his capacity as an outgoing Menteri Besar is indeed unbecoming. I have to agree with my mother, I think that he is behaving like a kindergarten bully.

I can understand that he needs to promote his father for the election, but I think he should show some "class" as a chief minister. 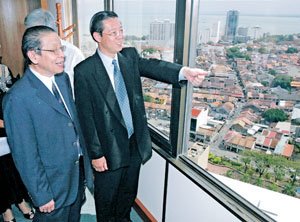 Now I'm not very sure whether my mother will vote for DAP again as she did in 2008.

KUALA LUMPUR, April 17 ― Lim Guan Eng took aim at Datuk Ghani Othman last night as the man “Umno no longer wants as MB”, as he went on the stump in Johor for Pakatan Rakyat (PR) and his father, Lim Kit Siang, DAP’s candidate for the Gelang Patah parliamentary seat in Election 2013.

Speaking to thousands of supporters gathered at the nearby Kulai constituency, the DAP secretary-general also attacked MCA for giving up the Gelang Patah seat to Umno’s Ghani, suggesting that party president Datuk Seri Dr Chua Soi Lek did not dare take on Kit Siang.
“Ghani is someone that Umno no longer wants as MB... so MCA has willingly given up a seat it has held for 50 years.
“If the MCA had any self-respect it would have told Umno it would even defend Gelang Patah in a three-cornered fight. At least then people will have some respect for MCA,” he told the rally.
Ghani was named yesterday as Barisan Nasional’s (BN) candidate for the Gelang Patah federal seat, which is seen as paving the way for Datuk Seri Khaled Noordin to take over as Johor mentri besar.
Gelang Patah is shaping up as the contest that will define PR’s push into the Umno bastion state.
The MCA seat was “loaned” to Umno after party president Dr Chua decided to sit out the May 5 general election.
Kit Siang is expected to leverage the Chinese majority in the federal seat but BN believes Ghani, who helmed Johor for four terms, may be able to keep the seat from falling into PR’s hands.
Gelang Patah has 106,864 voters, with Chinese voters making up 52 per cent in the constituency, while Malays and Indians account for 34 per cent and 12 per cent respectively.
Last night, Guan Eng whipped up the emotions of the mostly-Chinese crowd at the Kulai rally by condemning Dr Chua and MCA.
“We have sent a heavyweight to contest Gelang Patah. In DAP, there is no bigger heavyweight than Lim Kit Siang. But Chua Soi Lek the MCA president does not dare to come.
“Instead he is sending Ghani Othman. I am not sure if MCA has joined Umno or Umno has joined MCA,” he said.
The battle for Gelang Patah has become heated in the past weeks with Tun Dr Mahathir Mohamad leading BN’s attacks against the DAP and Kit Siang.
Last week, Dr Mahathir said that a Kit Siang win in Gelang Patah will result in racial confrontation and argued that Chinese-Malay economic partnership will be ruined.
The former PM issued a warning that Lim’s victory in the southern state would trigger racial clashes that would replace the existing co-operation between the Malay majority and Chinese community.
Posted by Annie at 16:08