This is the weekly posting by Ai, formerly of the Big Cat blog -

The weather in Taipei is mostly beautiful at the moment. I'm in the midst of packing my stuff. My flight home is on Monday. Will be home for almost two weeks. My flight is to Changi. Going to spend a few days in Singapore before crossing over to JB. I will be casting my votes for Pulai parliamentary and Kempas state seats. Several of my friends here are also flying home for the polls. I believe all of them are DAP supporters.

As I monitor general election news from home, I can't help feeling nostalgic about how I started the BIGCAT blog over a year ago. Now that GE13 is finally here, I recalled how lonely it was back then as there were not many English sopo blog in Johor supporting BN at that time. I was also rather ill equipped, having to mostly do my postings at cyber cafes. I only got a laptop much later after I moved to the Klang Valley in the middle of last year courtesy of a friend's generosity.

The BIGCAT blog now belongs to my friend Tinsel. I believe she is doing a rather good job. Well, I don't really like her putting too many pictures of cats in her postings, as I find them a bit irritating. But the blog is now her's and it is up to her to do whatever she likes with it.

Later in JB, I will join my friend Annie, the operator of this blog. She happens to be in Johor for the duration of the election. I'm glad that she had started this blog after I persuaded her to do so almost two months ago. I think she did an okay job so far with this blog.

I think BN will definitely win this general election. They will surely gain ground in the predominantly Malay states such as Kelantan and Kedah. They are also expected to do better elsewhere, especially in the Malay areas in Perak, Selangor and Negeri Sembilan.

Pakatan on the other hand will rely heavily on the support of the Chinese community, especially in the urban areas courtesy of DAP. This is especially so in the front line states of Johor, Sabah and Sarawak.

What I fear most will likely happened after the general election - a mostly Malay/bumiputera government on one side and a predominantly Chinese opposition on the other. A racial polarization which will take generations to rectify, if ever.

I believe PM DS Najib Razak is trying his best to prevent this from happening. But from the looks of things, I doubt he will be successful as the majority of the Chinese community seems hell bent on voting for DAP as they believe that the party represents them better than the Chinese-based BN component parties. Ask a Chinese about it and I bet nine out of ten that he/she will say that he/she will support the DAP.

As our society seems to be heading towards this racial abyss, Najib is trying one last card - fielding a Malay Umno candidate in a Chinese majority area in the hope that he will win and prove that all are not lost and that there is still a chance for us not to forever be politically divided along racial lines.

It's almost an impossible mission....maybe even a political suicide mission.

Yup, that person who was tasked with it is outgoing Johor Menteri Besar Datuk Abdul Ghani Othman.

He is contesting in Gelang Patah which voters are about 53 per cent Chinese. On top of that, he is up against the DAP patriarch Lim Kit Siang.

If Ghani wins, he will represents a hope that Malaysians will one day see beyond their ethnicity when deciding who are the better persons among us. 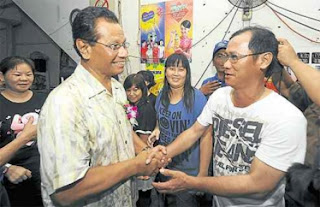 Going by his comparatively immaculate track record as Johor MB of 18 years, Ghani is definitely better than Kit Siang who is only coming to Gelang Patah with the sole purpose of piercing the BN stronghold of Johor.

I had written in the past about Ghani and how I admire him for his clean and efficient ways of running Johor. Many, including fellow pro-BN bloggers questioned my support for Ghani. Some even accused me of being on Ghani's payroll.

But my conscience is clear. I never receive a single cent from him in exchange for my support. Ghani is indeed a good man. I believe every sensible Johoreans, irrespective of race agrees with me.

I am praying from the bottom of my heart that he will succeed in his probable last mission - winning in Gelang Patah with the support of Chinese, Malays, Indians and other races.

Even if every Chinese majority constituencies in this country fell to DAP, if Ghani wins, we can still turn around and point at Gelang Patah to say that our Chinese brothers and sisters are not all blinded by their ethnicity and that there is still hope for our multi-racial Malaysia.
Posted by Annie at 02:48