( Note: Updates at the second half of the posting)

At the moment I'm writing this, Johor BN chairman Datuk Abdul Ghani Othman and his supporters are having a prayer session at his official residence Saujana.

They are praying for strength and blessings as they are going into this electoral battle. They are praying for the Gelang Patah folks and the rest of Malaysians to be given the wisdom to choose the right people to form the government which could ensure the continuation of this country's progress and racial harmony.

I have no idea what DAP supremo Lim Kit Siang and his supporters are doing right now.

Both side will gather at the Johor Baru Central Municipal Council headquarters for the filing of nomination at 9am.

I am going there now and will update this posting later in the day.

I was outside the Gelang Patah nomination centre when I received news that DAP sec-gen Lim Guan Eng had cancelled the party's plan to use their allies' symbols and instead stick to their Rocket.

So, the whole thing of his father crying and blaming MCA for DAP's CEC election woes were just gimmicks.

Earlier, the first to arrive among the BN supporters team were members of the MCA Gelang Patah led by their chief Jason Teoh. 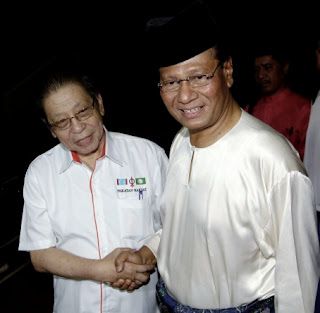 Among the about 5,000 BN supporters were MCA president DS Dr Chua Soi Lek and other State BN leaders. They sang the "Barisan Kita" as they marched to the nomination centre. Also with them were members of MIC, Gerakan, PPP and other BN component parties.

Kit Siang and company arrived with almost the same number of supporters.

It is heartening to note that the BN crowd was more multi racial than those of the Pakatan who were dominated by members of the Chinese community.

A nut case also turned up wanting to contest as an independent  against Ghani and Kit Siang but withdrew without filing his nomination papers.

After the nomination process has been finalized and candidates names were announced, Ghani told reporters that he decided to contest in the Chinese majority Gelang Patah constituency because he does not want to see the country become even more racially polarized.

I believe he wants to give the opportunity for the Gelang Patah folks, especially the Chinese community there the chance to prove that Malaysians will reject attempts to divide them further along racial lines.

It was a day of many surprises when numerous independent candidates turned up as spoilers to a straight fight between BN and Pakatan.

The most funny among them was perhaps the 80s singer Herman Tino, who will contest in his kampung at Tanjong Karang. The singer who is most famous back then for his Javanese songs probably got the cue from other 80s singers such as Pas' Aishah in Jempul and PKR's Dayangku Intan in Pengerang.

The most disappointing, or even tragic among the independents is Datuk Kamilia Ibrahim who quit as Umno Wanita deputy chief to contest as an independent in Kuala Kangsar.
Posted by Annie at 07:16