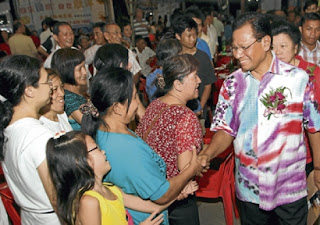 This is the NST report from Gelang Patah nomination centre yesterday -

JOHOR Barisan Nasional chairman Datuk Abdul Ghani Othman said he chose to contest in the Chinese-majority Gelang Patah parliamentary seat because he did not want to see the country becoming more racially polarised.
Ghani, who is also menteri besar, said there had been attempts to "polarise the political support of the people" and this would upset the multiracial co-existence in the state.
"I am hoping for this racial polarisation not to happen in this 13th General Election. We will defend whatever BN has done for the state and the country all these years.
"As menteri besar of Johor, the state has a good track record and we have been a strong government all these years. From all the parliamentary seats that we have won in the past, it is proven that Johor BN has the support of all communities and races."
Ghani, however, admitted that contesting the Gelang Patah seat was a daunting challenge as he had been the state assemblyman for Serom, Ledang, for 18 years.
"I will, however, take all this in my stride."
Gelang Patah is a constituency of 106,864 voters, consisting of 52.4 per cent Chinese, 34.3 per cent Malays, 12.5 per cent Indians and 0.8 per cent of other races. In the 2008 general election, BN's Tan Ah Eng, who is the state MCA Wanita chief, defeated Parti Keadilan Rakyat's Dr Zalina Mustafa with a majority of 8,851votes.
Ghani, who turned up at the Skudai multipurpose hall nomination centre in a cream-coloured Johor baju Melayu Telok Belanga, is facing DAP stalwart Lim Kit Siang.
His nomination was proposed by Fakhrul Anwar Ramli and seconded by Tan Ba Ba.
On the two new faces -- Dr Zaini Abu Bakar, who is BN hopeful for the Nusajaya state seat and Liang Ah Chy, who is BN's candidate contesting the Skudai state seat -- Ghani said both had their own supporters. Nusajaya and Skudai are state constituencies within the Gelang Patah parliamentary seat.
Over 5,000 supporters from each party accompanied their respective candidates to the nomination centre. The BN supporters were joined by a dragon dance troupe while the opposition's was led by a lion dance troupe.