Got a call from someone just now.

He is a Chinese guy who occasionally goes out with me for dinner.

He told me about the MCA Wangsa Maju's threat to boycott BN's campaign if their division chief is not chosen to be a candidate.

I told him that such things are happening all over the country now. For instance, the DAP people in Segamat Johor are also issuing a similar threat if PKR is to contest there.

He said he is worried about what will happen after the election.

I told him not to worry.

"You are not going to lose your job whom ever wins the election," I said.

"But what will happened to the country?" he asked again.

"Well, you believe that Pakatan is better than BN, so if Pakatan wins, the country should be better. If BN wins then worse come to worse, the country will still be the same. So, you don't have to worry" I replied.

"You will still have your job which pays quite well even if you vote for Pakatan but BN wins," I added.

He seems assured by what I said, upon which I added, Pakatan ruling the country should be alright....provided that the man in those sex videos is not Anwar Ibrahim who will be the Pakatan's prime minister. 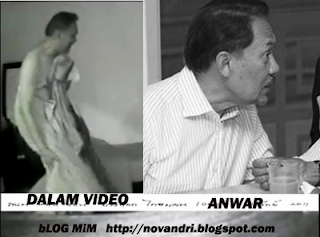 "Honestly, do you think the guy in those videos is not Anwar?" I asked him.

"Well, let's hope that the man in the video is not Anwar.

"Because if it's really him, and Pakatan wins, then the country is really fucked," I said.

p.s . Normally I don't use dirty words, but for this one I had to as I can't find other more appropriate words to describe such a possibility.
Posted by Annie at 15:56