I'm in no shape to write at the moment.

So, I'm putting this piece by NST's Azmi Anshar instead - 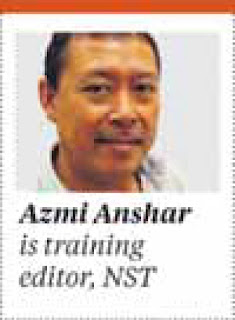 GLADIATOR VS EMPEROR: The fight for Gelang Patah is the battle to end all battles

THE bombardment of Barisan Nasional politicians/hopefuls flashed persistently through the SMS news alerts yesterday morning, all bewildering, breathless even, for a quick and casual reading of the implications.
But as the expectations and mild surprises settled (no shock that several long-serving ministers were dropped), the list of BN candidates offered for Saturday's nominations that elicited probable major fights could not eclipse the formidable battle shaping up in Gelang Patah.
It is a small typical Malaysian town 25km from Johor Baru more known for hosting the Malaysia-Singapore Second Link and the delicacy otak-otak but Gelang Patah is also the stage for the battle to end all battles, if you are so inclined to be seduced by the constituency's hype and shuddering consequences.
For those who have just crawled out of their shells, Gelang Patah will host the titanic battle between DAP supremo Lim Kit Siang and former Johor menteri besar Datuk Abdul Ghani Othman, the aged emperor challenged by the younger gladiator in an intriguing game of political poker.
When Lim was announced as the Pakatan Rakyat candidate for Gelang Patah, his rivals reacted with a mix of incredulity and a sinking feeling: Lim in Gelang Patah, despite being a traditional BN stronghold, might win handily on the mosh pit of Chinese support.
Suddenly, Jason Teoh, the MCA grassroots leader groomed to maintain the lock on Gelang Patah, looked vulnerable: against Lim's stature, Teoh can't even begin to quote favourable odds.
The definitive reason Lim dumped his Ipoh Timur incumbency for Gelang Patah was simple: he figured that since Ipoh Timur was already a cakewalk for DAP, it was logical that he extended his "winning influence" to other Chinese-dominated parliamentary seats that hadn't been a DAP's fixed deposit.
Besides, it could help materialise Pakatan's boast of conquering Putrajaya, Lim reasoned too and that's why he had asserted a takeover that echoes Datuk Seri Anwar Ibrahim's swank.
Lim is by nature a restless political journeyman who built a career peddling an ethnocentric ideology sugar-coated with multiracialism but fuelled actually by Orwellian hypocrisy.
Witness the dynastic stranglehold he and his son has over DAP despite preaching democracy, DAP's inability to elect a single Malay candidate to its central executive committee and continued dependence on Chinese-dominated seats while inanely challenging nemesis Tun Dr Mahathir Mohamad to contest in Gelang Patah, all in the name of multiracialism in ironies over ironies he condescendingly ignores.
Somehow, Lim's braying stuttered barely days ago after the masterstroke that was so ballsy and unprecedented that it was ingeniously simple: why not pit Ghani against Lim?
For once, the supremely confident Lim was conspicuously rattled, only because he didn't see it coming until it was too late.
Flummoxed by the audacity of BN's masterstroke, Lim reacted with typical hyperbole: he was not only battling a "life-and-death" political battle against a four-term menteri besar but also taking aim from the prime minister, the deputy prime minister and a certain former prime minister, whom he intends to sue for having the gall to identify him for what he really is.
On top of that, Lim just had to take a dig at MCA with another trademark hyperbole: criticising MCA for surrendering its stronghold to Umno and demanding MCA give up 58 more seats to Umno.
For all his bluster, Lim now realises that he has to fight toe-to-toe with a genuine Malaysian, a menteri besar who commanded the support and appreciation of the Chinese community in the 20 years he managed Johor.
If there was an Umno leader who was the epitome of 1Malaysia other than Datuk Seri Najib Razak, it was Ghani and this reputation is making Lim quiver in apprehension, thus his frivolous whining.
On the other hand, Ghani is not only calling Lim's bluff in this gritty political poker game but also raising the no-limit ante to its highest, shoving everything that he's got to force Lim to break the bank just to take a peek at the cards Ghani is holding.
In a nutshell, a Ghani win will cement his reputation forever besides delivering a towering morale booster for BN. A loss meant he bravely took a hit for the party.
A Lim win is just that, a win that forced the Chinese voters into a Catch-22, just like Penangites did when they had to choose between Lim and Tan Sri Dr Lim Chong Eu in 1995. But a loss will result in opprobrium and, possibly, Lim committing the ultimate political seppuku.
Sure, some parliamentary contests demand close attention -- Lembah Pantai, Putrajaya, Segamat, Keningau, Shah Alam -- but none will be as fascinating and riveting as the battle for Gelang Patah.