The man who can win in Gelang Patah

I think most people have read the speculative story about the possibility of outgoing Johor Menteri Besar Datuk Abdul Ghani Othman contesting against DAP supremo Lim Kit Siang in Gelang Patah. So, I think there is no need for me to link all those stories here.

Based on the report, Jocelyn Tan of The Star got an insider information that Ghani allegedly had told PM DS Najib Razak that he doesn't mind going against Kit Siang.

She then called up that big mouth Batu Pahat MP Puad Zarkashi for some nice juicy quotes on it. She probably knows that Puad doesn't like Ghani and harboring hope that he may stand a chance of taking over the MB post once Ghani goes for a parliament seat. He is, after all, will most likely be fielded for a State seat this time following the problems he has with especially the Chinese constituents in Batu Pahat.

In her haste to deliver the story, Jocelyn even gave a datukship to Puad in her story. She did the same for Gelang Patah MCA chairman Jason Teoh who is up till now is MCA choice to go against Kit Siang. (Jocelyn, I know you was all excited about getting the story, but, do be cool and don't make such mistakes.)

Ok, then to make the story even more credible, Jocelyn got additional quotes from JB MP TS Shahrir Samad and Nusajaya assemblyman Datuk Aziz Sapian. Shahrir's comment was fair while Aziz was just making up the number. For a story to look credible, journalists normally will try to get quotes from at least three people on the subject matter. Well, good job done by Jocelyn there. Now she got a story saying Johor Umno leaders are urging Ghani to contest against Kit Siang in Gelang Patah. Bravo! That was indeed a front page story material. I always admire Jocelyn's skills at coming out with these sorts of stories.

The reactions to that speculative story was actually even more amusing.

The opposition news portals were quick to respond with some saying that Ghani is committing political suicide for going against Kit Siang in Gelang Patah which has over 53 per cent Chinese constituents. Of course the basis was that there is no way that a leader of Umno, a Malay party currently hated to the maximum by the Chinese could survive a fight in a Chinese majority constituency and on top of that going against the great Kit Siang, the hero of Chinese community. Well, at least that's what their DAP racist mind seems to think.

Some of the portals even dubbed the potential clash as "Battle of the Titans".  Undoubtedly, that was quite dramatic. The problem with that tagline is that Ghani is just an outgoing MB, and therefore should not be regarded as a titan. Kit Siang on the other hand is worshipped by the DAP people and will continue as their idol till he die and beyond. The 72-year-old guy is indeed a titan, at least among the DAP people. So, the contest, should it ever takes place should instead be dubbed as "Battle of A DAP Titan Against A Crazy Malay Umno Guy In A Chinese Majority Area".

The Pakatan portals had also already came out with headlines which suggest that Ghani is being suicidal. They all believe that just because it is Kit Siang, all the 53 per cent Chinese votes in Gelang Patah will go to DAP. On that point alone Kit Siang has already won the clash. Those who are not familiar with Johor will believe that's the case too.

Reactions by Pakatan leaders however indicated that they were rattled by the speculation. Kit Siang himself was very cautious and not so gung ho like when he challenged MCA president DS Dr Chua Soi Lek and former PM Tun Dr Mahathir Mohamad to contest against him recently. In a ceramah in Batu Pahat last night, he said he is ready to face Ghani but he had never challenged the outgoing menteri besar.

Ghani, in his usual no nonsense style refused to entertain such speculations. He refused to comment on it.

Now, can Ghani actually stand a chance to win in a Chinese majority area against Kit Siang, the supremo of DAP at a time when the Chinese community is regarded as being hostile towards Umno and BN? Bear in mind that all Chinese majority areas in the country are considered as prime area for Pakatan to win and members of the opposition pact are fighting each other to contest such "sure win seats" such as in the case of Gelang Patah.

My answer to that is YES, Ghani can win in Gelang Patah. In fact, I wish that it was Guan Eng the DAP tokong who is contesting there instead of his father.

As to why I am so confident about it, let me be brief as I do not want to give away BN's strategy like that idiotic big mouth Puad. There are two factors -

1. Ghani enjoys good relationship with the Gelang Patah constituents. When he intensify his effort by visiting all the peti undi areas last year, those in Gelang Patah were the first that he visited. He is well known among the constituents there, including members of the Chinese community for the years of his service as Menteri Besar. He is a good Menteri Besar and the majority of the constituents there know that they are in safe hands with Ghani as their representative.

2. The Chinese community who made up 53 per cent of Gelang Patah voters are not as race centric as the DAP thought they are. They can see who is the better man between Kit Siang and Ghani beyond the racial sentiments.

My answer to that is POSSIBLE.

The only consideration which may prevent Ghani from contesting the Gelang Patah seat is Jason Teoh. 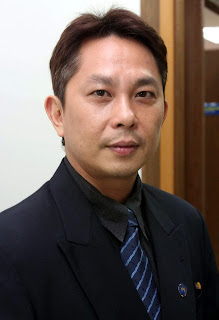 The young MCA man has been working tirelessly in preparing for the big fight he was hoping to have with Kit Siang. Intelligence reports on the ground indicated that Jason stands a good chance of pulling an upset against Kit Siang.

Unlike the Pakatan leadership which muscle through their agenda without any regard for their followers' feelings such was in the case when they fielded Kit Siang in Gelang Patah, the BN leadership took all things into consideration.

More so in this case that Ghani is involved. Ghani has always tries not to offend his fellow BN leaders. For instance, when Puad Zarkashi, who was his political secretary abandoned him just before the 2004 general election because he was not nominated as a candidate, Ghani tried to compensate it by giving him a senatorship and later recommended him for the Batu Pahat seat in 2008. Now Puad is a deputy minister and making statements in newspapers every other days.
Posted by Annie at 11:08