Anonymous21 April 2013 18:31
Both are true politicians, as they've given up their safe seats where they can easily win to contest in Gelang Patah. This battle is getting more exciting each day.

Kit Siang moved from Ipoh Timur, a Chinese majority constituency to Gelang Patah, a constituency which over 100,000 voters are made up of almost 53 per cent Chinese.

In all fairness, Gelang Patah used to be a MCA stronghold. So he is brave in that sense...I guess.

Kit Siang and Teo Nie Ching have been going around Johor telling everyone that they are brave for leaving their safe seats to venture into enemy territory in Johor.

It was said that Teo Nie Ching is in fact so brave that despite  being a devout Christian like so many other DAP leaders, she dared to give sermons in mosques in Pakatan-ruled Selangor as seen in this picture - 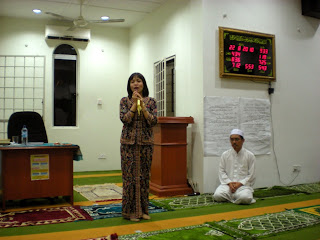 Perhaps, one day we will see the less alluring but similarly brave Kit Siang giving similar sermon at the mosque of Kampung Pekajang in Gelang Patah.

As for Ghani, I believe even the DAP people have to admit that he is brave to contest in the Chinese majority constituency of Gelang Patah at a time when the Chinese community is said to be hostile towards BN and especially Umno.

Ghani is going to Gelang Patah with just his good track record as Johor MB  and for initiating development such as Iskandar Malaysia which has immensely contributes in turning the once sleepy hollow of Gelang Patah into the most exciting new economic growth centre in the country. He also went there with the belief that he could persuade the Chinese voters in the constituency to choose a better representative based on what has been done in the area by the person instead of just the person's skin color.

Many, including Umno leaders had dismissed Ghani's bravery as being foolhardy. They don't think he will win because they believe that the Chinese majority of Gelang Patah will never vote a Malay, no matter how good he is, over a Chinese.

I want so much to believe that these Ghani's detractors are wrong.

I want so much for Ghani to be right for being brave because of his belief that his 18 years of clean and effective performance as Menteri Besar will be appreciated by all Johoreans irrespective of race.

I want so much for the voters of Gelang Patah to prove to the rest of the country that they are capable of seeing beyond the ethnicity of those who offer to represent them.
Posted by Annie at 23:24