Ghani on the ground versus Kit Siang in the sky

It is raining heavily in JB as I'm writing this. I'm taking a day off from work today. It's after all a Sunday.

A friend forwarded me the schedule of Datuk Abdul Ghani Othman, the BN candidate for Gelang Patah for today.

Well, it seems that Ghani's schedule is tight.

However, it is not as glamourous as that of his rival DAP supremo Lim Kit Siang.

These Ghani's little meetings with the electorates are normally attended by just a few hundred people while Kit Siang will have mammoth gatherings such as the one near Sutera mall last weekend which was estimated by pro-opposition websites such as Malaysian Insider being attended by about 10,000 people.

Kit Siang's ceramah now even have the added glamour of para-gliders flying above it carrying flags of the DAP, Pas....errr, I'm not sure if they carry the PKR flag (Is Dr Boo already ok with Chua Jui Meng?) 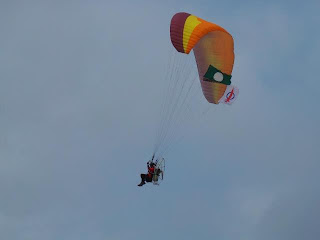 Kit Siang is also calling for a Press conference everyday. There are always things he wanted to highlight in the newspapers. Even the Singapore media is having a field day covering him.

Ghani, on the other hand is taking a different approach. To get his statement, reporters have to chase him through his tight schedule. Ghani's priority seems to be meeting the electorates as much as he can rather than getting on the pages of newspapers or TV screen.

I did ask a close aide of Ghani whether he was worried about his boss' campaign being too low keyed as compared to Kit Siang's glamourous strategy.

"No, I'm not worried. We know what we are doing. I just hope that those para-gliders are not going to crash and them later blaming BN for it," he said.

I hope he is right. It seems that the BN's campaign strategy in Gelang Patah is a repeat of how they did it in the Tenang by-election two years ago. BN, despite going low-key had won convincingly.

Whatever it is I'm glad that the BN's campaign in Gelang Patah is now visibly going full swing. Among others, BN posters and flags are finally all up in place at Gelang Patah as we enter the final stretch to polling day.
Posted by Annie at 11:19