Clearing up some nonsense

Left Kuantan after subuh and reached JB about 10am.

Was riding at normal speed with only a brief stop in Rompin to refuel.

Will only start working tomorrow and now just lepaking around.

Had a short nap after shower and now feeling quite fresh.

Now I'm having tea at a cafe not far from where I'm staying.

Nothing much to do,  so I'm writing this post.

It's a bit of something which I need to clear up, I guess.

First, you all should watch this video at this link,

Normally, I would paste the video here for your convenience but for this one you have to find it yourself in YouTube.

I don't want to dirty my blog page with it.

For you all who are too lazy to do that, it's a video of someone badmouthing the BN government, the police and the 1Malaysia concept of PM DS Najib Razak.

The video was uploaded in September 2010.

At that time I was busy on the ground in Johor helping Umno preparing the defense of the state for the 13th general election.

You can verify this with the Johor Umno war room director at that time....if you can find him lah, as I'm not really sure where he is now.

About nine months after that video came out, the person featured in it came out with a blog which has since turned to be very pro-BN and anti-DAP.

I was actually surprised at that time because I was familiar with previous literary works of the person, especially those which were featured in Malaysiakini.

But then I decided to give the person the benefit of a doubt.

When I joined my two friends Ai and Tinsel to set up the BIGCAT blog, which story you can read here,


we voted on which blogs should be included in the blogroll.

Ai and myself voted to include that person's blog while Tinsel was against it.

Tinsel suspected that there was something fishy about that person.

But the decision was made on majority and the person's blog was included in the Big Cat's blogroll.

I remember that Ai, who was the leader of our team was quite fond of the person.

After Ai left the team just before the general election, Tinsel took over our blog while I set up this blog after asked to do so by Ai.

Tinsel, who became largely inactive as a blogger after the general election kept that person's blog in the blogroll until recently when she can't stand it anymore.

Myself on the other hand had included that person's blog in my blogroll since day one and was supportive of it.

You can check this blog's archive to verify that.

My problem with that person only started last month after I disagreed with the "either you are with us or against us" dogma which some tried to drum in among Umno people following the party's civil war.

My belief was that, those who were not willing to take sides, such as myself, should not be treated as enemy and be cut off from the party. Their votes are after all needed for the next general election.

After all, some of these people have been with Umno all their life.

I don't think it's appropriate for someone, such as that person, who had not that long ago been so anti-BN and probably anti-Umno too, now calling for the party to get rid of them just because they choose not to take sides in the civil war.

Since then I had checked with those who knew more about the current thinking of Umno leadership and it was confirmed that the "either you are with us or against us" dogma is indeed the party leadership's stand.

For me, that's the right of the Umno leadership but I can't agree with such thing.

I had then decided that I don't want to have anything to do with it and felt that it's better for me to quit writing politics.

I have been mostly writing about some small stuff since I moved to JB.

But the bad mouthing by that person continues, complete with all sorts of ridiculous accusations attached to it.

Honestly, I'm not really sure where all the hate came from.

I have had quarrels with DAP people in the past but not even they had ever attacked me like that person.

Again, you can check this blog's archive to verify it.

This is I think the first posting which I recorded of my quarrel with the DAP people,


It has always been the policy of this blog to exercise minimum censors as I believe in freedom of speech and expression.

That's why I let through most comments by the DAP people and even those who attacked me with vulgar words.

I think I have been fair even with those DAP people as I never used the term "red bean army" to describe them.

Check the blog archive if you don't believe me.

I refused to use that "red bean army" term as I know that many of those DAP people who attacked me were not paid cybertroopers.

But this particular person had accused me of colluding with those DAP people.

I know that some of you all find this whole thing quite entertaining.

This blog's stats counter had actually spiked up ever since it started.

Okay lah, I'm pleased to entertain you all.

Whatever it is I hope this is going to be my last posting on this nonsense.

After this I will try to ignore it.

I need to do other things too.

Bad enough that my book project has to slow down now that I have to occasionally write politics again.

If I don't do that, all sorts of bullshit will fly again.

It's okay if the shit just hit me, but apparently there are others who have nothing to do with this nonsense were also affected such as my former boss as I highlighted in my last post.

Sorry if this nonsense posting is a bit long.

Okay, need to meet some friends from Kota Iskandar in a short while.

Hopefully the rain will ease off soon and they can get here on time. 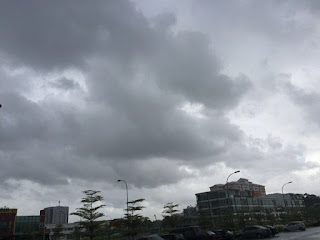