Packed my stuff at the office yesterday.

Turned out that I don't have much.

Just a small box of stuff.

Will be driving down to JB tomorrow and pick up my bike later.

My father wants me to start there on Monday.

My boss was okay with it all, as he understood the urgency of matters I need to take care of in JB.

It's always been like that when ever I'm starting a new phase of my life.

Even though I'm not so fond of JB, I spent perhaps the happiest days of my life there.

I met my ex there, which is the best memory for me ever.

I hope to stay in JB as long as I can this time.

Recent events have convinced me that I needed a change of environment and my father's request for me to help things out in JB was a welcomed relief.

I also feel that I now need to disengage myself from politics.

It's because I'm not longer sure whether my political stand was still the right one.

When I first started blogging, I openly declared that I'm pro-establishment because I believe in it.

I never tried to pretend to be neutral or anything else.

I used to believe that BN will always be better than Pakatan.

This is mostly because I found that BN people are nicer than those who support Pakatan.

That's the effect of me mixing too much with people of former Johor Menteri Besar Datuk Abdul Ghani Othman.

Like their boss, I found those people to be good, honest and sincere.

Another thing that I like about being a pro-establishment blogger, I can criticise the establishment if I disagree with what it's doing.

This can't be said of those in Pakatan.

For instance, DAP never tolerate criticism by its members. Those who do so would be chopped off from the party.

As comparison, it has never been an Umno's culture to throw out its members for not showing enough love for the party leaders.

Now, I realised that things have changed.

In Umno now, those who hold power, via their people appear to promote the dogma of "either you are with us or against us", meaning those who are not "with us" would be chopped off for they would be deemed as "against us".

They sound almost exactly the same as the DAP people. actually.

"We don't take prisoner" so they said.

There  have been many other elements which made me realised that Umno has changed, but those absolutist slogans which seem to be promoted as the party's stand these days were what finally turned me off.

Even though I'm not a member, I supported Umno's struggles because of its ideals and the good example displayed by leaders such as Ghani and his people.

Now that the party is in the grip of people who are touting things such as "either you are with us or against us", I don't feel I want to have anything to do with it anymore.

I don't want to be part of a gang who goes around threatening people like that.

I supported the establishment because I thought I was doing good, not because I want to be a gangster.

I believe the core ideal of the party which is Malays unity for the betterment of Malays has finally died because of this new attitude as promoted by the bloggers of the party.

How can they talk about Malays unity while they go around threatening and kicking out Malays who love and support the party just because they disagreed with its leader?

I know that someone had tried to modify that "either you are with us or against us" dogma by categorising Umno people who disagree with the party leadership into certain groups to soften its effect, but I think it's too late now, at least as far as I'm concerned.

I have now seen the ugly arrogant face.

Told myself that if that's the new face of Umno, then I never want to be part of it anymore.

That's why I want to disengage from politics.

It's never been a Malay culture in the first place to be arrogant and cruel.

A Malay leader does not go around killing innocent civilians just because they don't support him.

And this is Tanah Melayu, land of the Malays, not ancient China where the Emperor went around killing whole clans just because several members of them rebelled against him.

"Either you are with us or against us" is not the way of the Malays.

If Umno practises that, then as far as I'm concerned, that party is no longer a Malay party.

I don't want to support such a party.

From now on, if I want to continue blogging, I'll most probably write about things which can really help the people.

Things like clogged drains in the neighbourhood, how to fix a bike, being safe on the road etc. 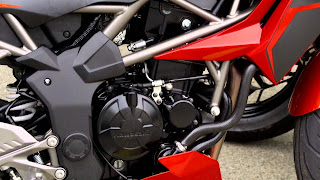 I intend to stay away from politics as much as I can from now on.

Okay, have a good day everyone.