Unite and move on - is it too late for that?

This is what PM DS Najib Razak said in his blog

3. This issue has been an unnecessary distraction for the country. Now that the matter has been comprehensively put to rest, it is time for us to unite and move on.

You can read the full Najib's statement which was issued after the Attorney-General cleared him of wrong doing over the SRC and donation issues at this link,

So, how are we to unite and move on?

Does this mean the "either you are with us or against us" dogma which I'm so much against is no longer applied?

Personally, I think it's going to be tough to reverse the trust deficit caused by the Umno civil war which swirled around those issues.

The fighting had been fierce and damages caused by it very severe.

I think the situation now is worse than in the run up to the 2008 general election where a rebellion against then PM Tun Abdullah Ahmad Badawi caused BN to lose its two third majority and started the slide in public confidence towards the coalition's government.

Throughout the height of the Umno civil war last year, I tried to take the middle ground in the hope of mitigating the fallout of the fighting.

Please check the archive of this blog to verify it. I'm too lazy to find the links of my previous posts for you.

Of course I knew that it's a futile gesture from the start, but I felt that it must be done.

My conscience wouldn't be cleared if I didn't do that.

As a result of that I was shot up by both warring sides.

The anti-Najib camp called me a pre-paid blogger while those defending the PM labelled me as a "Protun".

Well, they even shot me up after I stop trying to defend the Umno's middle ground.

Please read my last post as reference on that.

Now that Najib has once again called for unity, it would be interesting to see how his people will react to that.

Will there be a peace deal, or something like that in the coming days?

For me, the first indicator whether peace will come our way should be what is going to happen in Kedah.

Will the state have a new menteri besar? 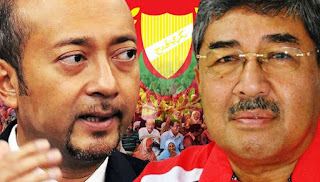 I don't think Umno will "unite and move on" if DS Mukhriz Mahathir is to be ousted.

The rebels will continue the fight if it happens and with that the trust deficit is not going to be reversed.

Bear in mind, the general election will be just slightly two years from now.