There was a huge spike in the number of people visiting this blog yesterday after I put up my last post,


It was obvious they wanted to read about DS Mukhriz Mahathir following the demand of Kedah Umno leaders for the man to be removed from his MB and State party chief posts.

I felt quite guilty as I believe they must had expected more from me other than my no comment in that post.

But really, I'm out of politics and don't feel like commenting on it.

Furthermore, I'm not really an expert of Kedah politics, so, I don't think my opinion on the matter should be considered.

I don't have a "great mind" that I can use to comment on something I'm not really in touch with.

The last time I was in Kedah was actually when I was hanging around in Gurun in Nov 2013 at the height of campaigning for the Sungai Limau by-election.

That's quite a while ago and I'm afraid if I try to memandai-mandai (being clever) I may not give an accurate assessment of the situation there now.

However, I think I can share a bit about my experience of meeting Mukhriz a couple of times in the past.

It's just a bit of what I think of the man based on the few memorable encounters with him rather than about Kedah politics.

After all, I think these are going to be the last days of Mukhriz as a politician.

So, I guess it's no harm writing about him before he disappeared altogether.

I had previously wrote about my first encounter with Mukhriz which was sometime in the late 1990s.

But never mind, let me write about it again.

It was at a children colouring contest organised by a bank in KL.

I was observing the kids doing their things and seated next to me was this very ordinary looking guy.

He looked quite young and very well mannered.

I introduced myself and he did likewise.

"I'm Mukhriz," he said as he handed me his name card with a smile.

I can't remember exactly why he was there, but we talked quite a bit.

He even told me about his passion at that time which was scuba diving.

I only realised that he is the son of Tun Dr Mahathir Mohamad who was then still the prime minister after a friend had a look at his name card and told me so.

I had a few other encounters with him after that but they were just very brief.

He was always still the same, nice, soft spoken and extremely polite.

The next significant encounter I had with Mukhriz was a few months after he became the Kedah MB in 2013 and just a few days before nomination for the Umno elections.

A prominent blogger friend took me to his house in KL for the occasion.

As usual, he was nice.

But I sensed that he tried quite a bit to look more serious, probably because he wanted to project such an image due to his MB post. It didn't last very long though as by the end of our almost two hours conversation, he had reverted back to his usual cheerful and humble boyish self.

Towards the end of it, I asked him the question which I had really wanted to ask.

"Datuk, are you going to contest for the vice-president post or not?"

Mukhriz paused before answering me.

"It's quite difficult for me to decide. Those above don't want me to contest while on the ground, they keep pushing me to do it," he said, still with a smile.

Then somehow I became very bold and said something like this,

"Datuk, if even someone like you decided not to contest, and the Umno leadership remain as it is, what's there to inspire someone like me to continue supporting Umno?

"Please don't tell me we are going into the next general election with the same line-up and same strategy. We didn't do that well in the last one.

"We need someone fresh and untainted like you to be among the top party leaders so that we can improve the party's image.

"I'm not an Umno member but I support the party and is doing all I can to help because I believe in its struggle to unite the Malays for their betterment.

"Datuk, you know that I'm not one of your people and will not gain anything for myself if you win. I just want what I think is best for Umno so that I can continue to support it."

Mukhriz seemed to listen to my little rambling but didn't react to it.

However, much to my delight, he announced his candidacy for the Umno vice-president post a few days later.

The odds were against him as it was clear from the start that the party leadership wanted a status quo for all the top posts.

I tried my best to help his campaign.

I even came up with an opinion poll, which results you can see at this posting,


But it was not to be. Mukhriz lost a very close race to the incumbents.

Well, at least he tried.

I met him again during the campaign of Sungai Limau by-election not long after that. 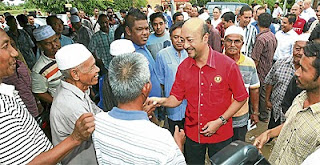 I was with my big boss at that time when we met him as he was going on his campaign rounds.

He talked mostly with my boss but at one point he pointed to me with his usual smile and told my boss "You have to take care of this one".

I just laughed at that.

The last time I met Mukhriz was about a year later at the Umno general assembly.

We chit chatted for a while.

I remember asking how his father was doing as the elderly statesman was not very well at that time.

He told me that his father's condition was not so bad and he was recovering.

Then I did something for the first and only time in my life.

I asked to have a selfie with him.

It's the only picture  of me with a politician till this day.

Well, I wish Mukhriz all the best.

Maybe what happened now is the best for him, after all.

Less stress, I guess, after he quits politics.