Peace butterfly and the best curry puff ever

At home in Kluang.

Sat on the bench at the porch and saw a butterfly busy at work.

Managed to take its picture. 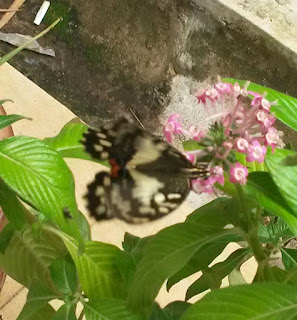 It made me felt at peace, which is good.

Earlier, I thought of taking my fight with a "former" DAP operative a notch higher.

I have all the ammunitions ready.

The "former" DAP operative and gang have been going on and on for weeks throwing all kind of bullshit at me.

They thought they can destroy me and my blog using the DAP's "repetitive technique".

I can actually go all out with it if I want to as my blog is not tied to any paymaster unlike those who were paid to fill up certain quota to whack others.

If you are smart you can differentiate between those who are paid to blog and those who blog from the heart.

And you can tell who blog in support of Umno for a living and who blog genuinely for the love of Umno.

Yes, I was ready for a long drawn fight.

I got less to lose anyway.

But then, seeing that butterfly just now made me think, why should I waste my space and time for them.

I should just carry on like the butterfly, minding my own business.

I'll be happier that way.

Umno now don't even want someone like me anymore.

They prefer people like that "former" DAP operative to defend them. Even willing to pay large sum of money for it.

They don't even care what's really in the heart of the person.

So, why should I bother.

Well that's about it.

Anyway, yesterday I found the best curry puff ever.

Bought it just before going to fetch my grandmother and aunt in Singapore. 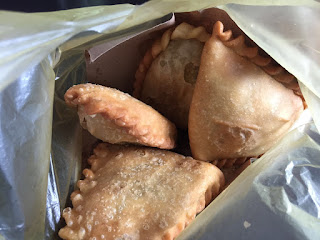 I don't know why, but the stall operator called it "Karipap Penang".

I don't really like Penang, probably because of Guan Eng, but that curry puff is very delicious.

The curry puff stall is in front of the market at Taman Perling, JB.

Okay, everybody are up and ready to start clearing the house and I better go join them.

I will write again later if I have the time.