Safety at JB construction sites should be first class

There was this report the other day about

The place of the accident is not far from where I'm working now.

The unlucky man survived the fall but I agreed with him (as per reported) that he was lucky not to be impaled on the metal piling rods at the bottom of the pit.

This is the picture from the report, 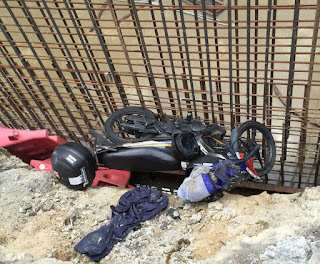 According to the report, the man, who was riding his motorcycle was trying to avoid being hit by a car when he fell into the construction pit.

It's the project to beautify the Sungai Segget along Jalan Wong Ah Fok.

The thing is, I think those responsible for the project should have provided better safety measures for road users plying along the stretch.

This is the picture of the place near where the accident happened, 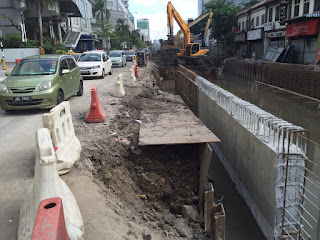 If it's in a third world country, then it's okay lah, but this is Iskandar Malaysia which is supposed to be the same level as developed countries.

By right, the safety precautions at such construction sites should also be at a higher level.

They should do more as anyone could easily fall into the construction pit like the motorcyclist.

I think Iskandar Regional Development Authority (IRDA) which is in charge of the project need to make sure the contractors appointed by it to carry out the project adhere to a higher safety standard than currently practiced by them.

Development is good but it should be carried out properly so that the people are not put at an inconvenience and their life and limbs at risk.

Maybe they can do it like this one in Singapore. 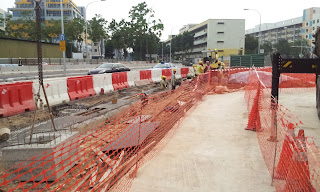 I hope IRDA can make sure their contractors can do their workslike in Singapore so that there will be no more accident such as the one involving the motorcyclist as per reported.