I wrote that it was,


Yesterday, Tan Sri Rafidah Aziz ,  who was once considered as the "Iron Lady of Malaysia" and the last great Wanita Umno leader  said this. 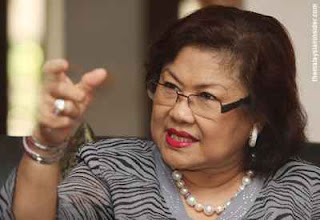 
“While freedom of speech must have parameters determined by factors such as decency, respect for the religious beliefs of others, and the rights of the majority, it is important that media is not unduly penalised, not for going beyond those parameters..but for reporting what some determine to be unsavoury,” she wrote on her Facebook page.
“Surely we are not going the way of some countries where media is directed what to print and not otherwise? Those responsible MUST begin to give to the public the FACTS, and communicate coherently and clearly and to say things as they are, regarding 1MDB or other issues of public concern.
“We can ban some publications… it does NOT solve anything, really,” she added.
Rafidah suggested that the word ban be removed from Malaysia’s political vocabulary, warning that moves like the suspension of the two papers would only turn the public against the government.
She stressed that the government needs to adopt a clear-minded and rational approach in the present era of social media, as any move to block information will only spur more discussions online.
“AND Social Media communication will still continue… and now there’s a new topic to discuss, and condemn. And don’t tell me we now must ‘shut down the Internet’?” she said.
Posted by Annie at 02:17