The Malay psyche and drama

I believe it will just get worse in the coming days.

I'm more inclined to believe that it's more of a warning for the Umno deputy president and DPM to shut up about the 1MDB mess following his speech at the Cheras Umno division meeting on Sunday night. 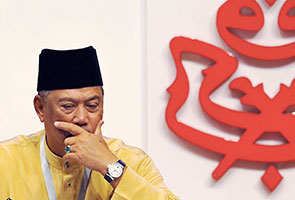 I doubt he will heed that warning though.

What else can he speaks of now that the Umno divisional meetings have started and everyone are talking about the mess.

He will be going around the country to some of those meetings to officiate them.

Muhyiddin has no choice but to speak of it as that's the main concern of Umno members at the moment.

And once he does, he will almost certainly face disciplinary action and it's not that too far fetch to imagine him being stripped of his posts for breaching party discipline.

After all, it's not going to be the first time a DPM and Umno deputy president being sacked.

Bear in mind that some of them have already started calling TS Muhyiddin Yassin a pengkhianat (traitor).

If it ever reached that stage, then it's just too bad.

Everything will break apart for Umno after that.

There will be no way that the party can be repaired in time for the next general election if that happened.

Well, maybe the Umno leadership and ketua-ketua bahagian will remain intact behind DS Najib Razak, but support among grassroots members will be gravely weakened.

The support among non-members will be worse.

It's the way of Malays to be sympathetic to those appeared to be victimised.

They will feel that for Muhyiddin.

He will become a hero for them.

Once that happened, it doesn't matter anymore if Najib didn't steal the billions of ringgit as alleged.

He will automatically becomes the villain.

I love it too.

A hero victimised by his powerful evil nemesis.

It sounds nice isn't it?

Well, DS Anwar Ibrahim is one of the beneficiaries of that Malay psyche.

He got all those support during the Reformasi of late 1990s because of such sentiments.

Unfortunately for him, the Malays are now bored of him.

It just doesn't work for him anymore.

Well, they can have it now.