Probably due to lack of sleep.

I really shouldn't had stayed up late like yesterday.

Woke up for sahur just now but could only eat a bit.

Thought of writing about the latest attack directed at DS Rosmah Mansor but just can't find the idea how to start.

Well, I had defended Rosmah before because I pity her for being hit left, right and centre in the social media.
example:

Megalomaniac editor who made me pity Rosmah

Then I was whacked even by friends because of it.
example:
Annie's bad habit and the need for her to see the bigger picture

Rosmah is an easy target and I think not many care to defend her unless maybe if they were paid to do so.

But I don't mind. I did what my heart said.

However, this time I find it difficult to go out of my way to think on how to construct my argument for her.

I'm really having a mental block.

Well, let me then just state my stand on the latest two "news" about Rosmah,

1. Convicted murderer Sirul Azhar, now in Australia, was said to issue a statement saying Rosmah was behind the killing of Altantuya.
My stand: Sirul's lawyer had dismissed this as mere rumor. Anyway, I never believe Rosmah being that evil. I didn't believe in the statutory declaration that she personally supervised the murder. I don't think I will ever believe that.

2. Rosmah is the ultimate beneficiary of the alleged corruption in the 1MDB mess.
My stand: I never even bothered to read Sarawak Report which made the allegation. I don't trust it as it's not credible. But this accusation is more logical to me than the first one. I prefer to wait for the outcome of investigation by the special task force currently trying to sort out the 1MDB mess.

The only "crime" of Rosmah which I'm really sure she is guilty of was that she failed to act the way a wife of a prime minister supposed to be in this country.

For that, she failed to help her husband as the prime minister where it matter.

It's all about perception, and she seems so far still struggling to understand that concept.

Well, many find the following as a rebuke of Rosmah, but I rather see it plainly as what it is - an honest advice for her and others in such a position as hers.

The Dr Siti Hasmah guide to being the prime minister's wife 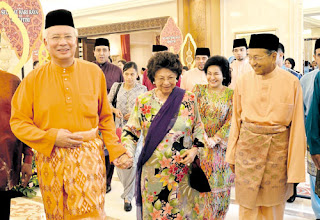