The end of a golden age

My mother sent me this today and said it is similar to how she sees Umno's rule now,

Don't try to google translate it as it will only turn gibberish.

Only a Chinese educated person can really understand it.

I copied and pasted the following from www.travelchinaguide.com/intro/history/tang/reason-decline.htm
so that you all get to know what caused the demise of the dynasty which rule, according to historians, marked the golden age of China.

There were four reasons leading to Tang's decline, among which the dominance of the eunuchs, the separatist regions of Fanzhen and clique conflicts were internal factors while peasants' uprising was the external factor.

First, the dominance of eunuchs during this dynasty was unparalleled in Chinese history, much more rampant than that of Eastern Han Dynasty (25 - 220) and the Ming Dynasty (1368 - 1644). From the late period of Emperor Xuanzong's reign, the old convention that eunuchs could not be appointed as high officials was broken. At that time, eunuchs' power began to expand. Especially, the celebrated eunuch Gao Lishi reached a position superior to some princes and ministers. In the reign of Emperor Daizong, the notorious eunuch Li Fuguo grasped the military power and controlled the royal power.
Gradually, the power of eunuchs became stronger and stronger. They were able to formulate the national policy, to appoint and remove court officials and to enthrone and depose emperors. As the dominance of eunuchs became serious, the military power of central regime was weakened. Additionally, some wise-minded chancellors were hard to express their ideas. What is more, power struggles between eunuchs and chancellors greatly weakened the ruling of the central regime.

Second, the separatist regions of Fanzhen were another major problem in the late period of the Tang Dynasty. Actually, the separatist regions of Fanzhen originated from the set-up of Jiedushi (regional military governors). In order to safeguard the border areas, the emperors used to set up many institutions called Jiedushi at the frontier. After the An Shi Rebellion broke out, the Tang court set up more regional Jiedushi to defend the central regime. With much administrative rights and military power, those Jiedushi gradually turned into many separatist regimes called Fanzhen. In competing for the farmland and labor, battles between Fanzhen and the central court constantly broke out. To some extent, all these Fanzhen regimes became small kingdoms whose military forces were only responsible for themselves. This had threatened the unification of the whole country.

Third, the conflicts between the different cliques were an indispensable factor that caused the decline. The court officials of Tang were mainly made up of two groups. One group was from the traditional noble class while the other group came from the civilian class. Due to different class origin and political status, these two groups respectively formed their own parties. In discussing the state affairs, these parties usually held different political views and adopted disparate policies. In order to be superior to the other group, all these parties were entangled with power struggles. As a result, all these internal disputes broke down the power of the central regime.

The last one was peasants' uprising which was the only external factor that directly led to the decline. In the late period, the land annexation was quite serious. Under the oppression and exploitation of the landowners, peasants endured a hardship. Because of the years of war, peasants were imposed more tax. Besides, eunuchs forcibly occupied peasants' farmland and extorted their money. When it came to Emperor Xizong's reign, the natural disaster raged for years and the output of food decreased abruptly, but the Tang court still imposed much tax on peasants. Finally, peasants' uprising broke out just like the turbulent flood that could not be restrained. Especially, Huang Chao Uprising was a large-scale peasant's rebellion which greatly shook Tang's regime. After the heavy blow of Huang Chao Uprising, the Tang Empire started to go to rack and ruin. 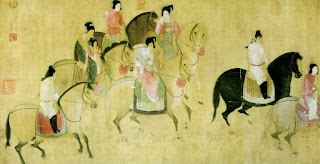 Umno has only been around for 69 years.

I hope my mother was wrong.

Anyway, here is a short poem from the Tang dynasty period;

A SONG OF A PURE-HEARTED GIRL

Lakka-trees ripen two by two
And Mandarin-ducks die side by side.
If a true-hearted girl will love only her husband,
In a life as faithfully lived as theirs,
What troubling wave can arrive to vex
A spirit like water in a timeless well