I can understand Muhyiddin's sacking, but not Gani's

I think most of those who were upset was mainly because of this story,

Zahid is new DPM as Muhyiddin is dropped


But it was not so in my case.


it's the prerogative of PM DS Najib Razak to include or exclude him in the Cabinet.

If Najib can't work with his deputy, then he has every right not to have him as his deputy.

It's sad but I accept that.

However, I'm actually very much more upset by this one, 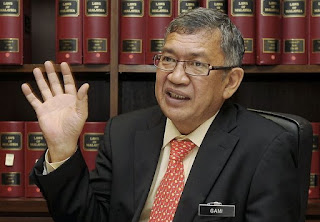 
National news agency Bernama today flashed a report on its Twitter account saying that Gani’s services were terminated for health reasons.
When contacted for confirmation, Gani told The Mole : “That’s what the letter to me states.”
Asked whether  “they resigned” him,  he said: “Yes, they terminated my services.”
Why did they sacked TS Abdul Gani Patail?

He seemed to be unhappy about his dismissal.

It's not like he said "Yes, I'm not feeling well and therefore I resigned."

I think we have a lot to worry about.

After all, as we all know,

Gani is heading the task force investigating the controversial 1Malaysia Development Berhad (1MDB), where the government-owned strategic investment firm faces allegations of misappropriating billions of  ringgit.
Are they going to also sack the other,

Especially Zeti. Will they sack her too?

How are we to trust the findings of the Special Task Force now?

Najib had repeatedly asked us to wait for the conclusion of the investigation.

I hope some knowledgable Najib's supporter will try to answer my questions here.

Otherwise I have to conclude the same as many already did, that what happened yesterday was a plain crude purge to save the prime minister from the 1MDB scandal.
Posted by Annie at 08:55