Lately, everything seems small for many Malaysians compared to the 1MDB mess.

As rival camps debated on whether DS Najib Razak is still fit to be prime minister, other things are happening in the country.

At the moment they were talking about whether to arrest and charge those who undermine the PM for treason.

or Malaysia Online's (The Mole's)

Personally I think it's quite ridiculous.

You all really want to accuse and then execute those people who oppose PM for treason?

It is crazy, okay.

Imagine this headline - Mahathir to hang for treason.

Anyway, as I said, other things are happening while we were so fixated on that nonsense.

This is a Malay Mail Online's story yesterday 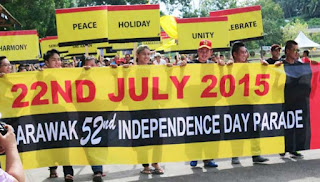 Now, if we are so itchy to accuse someone of treason, this is our real chance.

Anyone who promotes the break up of our country is a traitor.

There should be no compromise on this matter.

If Najib wants to demonstrate his willingness to be tough, which many have been disputing all this while, this is his chance to do so.

It shouldn't be tolerated, either it be for Sarawak, Sabah or the other states such as Johor.

Yup, there are now people in my home state Johor who wanted to take it out of Malaysia.

They wanted to turn it into another Brunei.

I wrote about it here,


Idea of secession must be stopped

I think if no firm action is taken now, the secessionist movement will soon spread to especially places like Kelantan and Penang.

Once that happened, it would be too late to save the country as it is now.
Posted by Annie at 07:33