Guan Eng, are you really stupid or is it just your poor BM ?

A friend forwarded this to me just now and I was like,
Alamak Guan Eng, this is not how a finance ministry should issue its press statement. 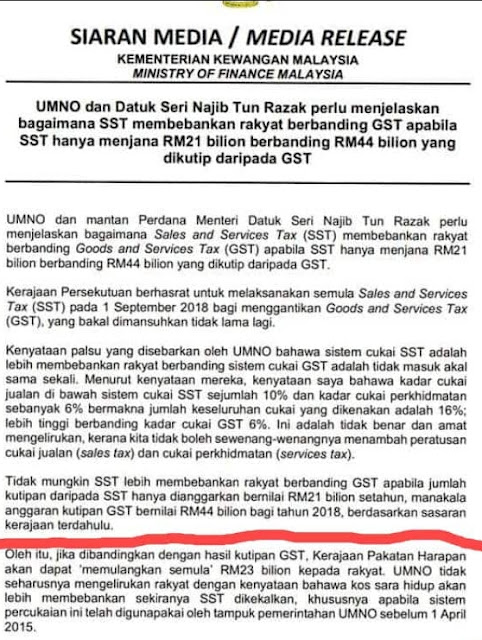 Hello, you are the finance minister now la.

Just do your job.

Implement the SST and if you are right, all the prices of goods will go down and you will be the hero.

Why get so upset and issued such a silly press statement like that?

Is it because Guan Eng already knew that once SST is enforced, prices of goods will be even worse?

But still, he shouldn't lose his cool and turned childlike.

Actually, all these while I was just joking around about him not being bright enough.

I know that Guan Eng is an accountant and accountants are not stupid.

But now I'm not so sure anymore after reading that Guan Eng's childish statement.

Maybe there are stupid accountants.

Or is it his Bahasa Malaysia is not so good that the statement came out all stupid like that?

Maybe I should check his Chinese press statement....hmmm, see how lah.

Anyway, the guy who forwarded me the press statement also sent me this, saying it may help Guan Eng and his supporters to have some understanding of GST and SST;

Our Finance Minister does not seem to understand why there is a RM23b gap between GST and SST collections.

Let's get the basic out of the way first so we can agree on this:

*_Because zero-rating GST since last month did not see any drop in prices and some prices actually increased, imposing two new taxes - a 10% sales tax and a 6% service tax - WILL INCREASE prices for some goods and services. There will also be no reduction in prices compared to prices today_*

Okay, since we agree on the above, let's move on.

- The additional RM23b reduction in collection is because businessmen will now get to evade taxes because the self-policing system of GST no longer applies.
- Businessmen will now charge and collect service tax but will not remit to the government - just like before.
- The underworld and black economy (ah long, robbers, prostitutes and pimps, triads, pirated DVD sellers) which do not declare their business will no longer be paying  GST when they buy stuff.
- Also, the tourists and foreign workers who were previously paying GST no longer needs to pay any tax as they will not be buying goods such as white-goods or cars which will be hit by sales tax.

That is where the RM23b gone to while us everyday ordinary people have to contend with higher prices - even higher than before GST was zero-rated.

That is where your RM23b went. But did it go to the right persons?

If not, just admit that you have screwed us, screwed our economic system and put us back into the dark ages of a tax system that few countries in the world still uses.

I think once the SST is back in place and if stuff get more expensive than before, we should all just adjust our personal budget again.

But if things get so bad that we couldn't adjust anymore, then we can always ask the government to revert back to GST.

Maybe it's okay if PH is the one implementing the GST....unlike BN-Umno.

Here's a good explanation on GST,
Just click on the link, okay.