How do you stop someone from stealing something?

Let's say you know for sure that a bad boy wants to steal a cake and eat it.

Do you wait until he had stole and ate the cake before you try to stop him?

Or do you do something before that happened?

Of course you can't accuse the boy of stealing and eating the cake before he does so, but at least you can warn the owner of the cake to be careful, because that boy may steal and eat the cake.

This is especially so if the boy has a record of stealing and eating cakes in the past.

The bad boy may deny that he wanted to steal and eat the cake, but at least the owner had been alerted of his intention.

I think that's better then doing nothing until the cake had already been stolen and eaten.

As for this blog, some of my postings are actually quite useless as they changed nothing.

For instance, this posting,

which received 78 comments at the moment and now one of the top five of this blog's most read posts.

It highlighted the coastal development of Tanjung Puteri on the land where the former CIQ of the Causeway was located.

The land was converted to freehold status and sold to a developer from mainland China under dubious circumstances.

But, it's useless and served no real purpose.

It's because the land had already been sold and you can't do anything about it.

Now, all you can do is watch and curse the crooks who had sold the land.

Well, the crook himself doesn't give a shit.

He already got his money.

Quite useless, isn't it?

The same goes with the other coastal reclamation projects given to the mainland China companies.

Those were all gone case too.

You can't reverse it.

You can't stop it.

So, forget about the eco system, and all the other environmental concerns.

They are gone case.

That seahorse breeding ground near the site of the project, which the environmentalists have been protecting all these years?

That project will go through, by hook or by crook.

It supposes to make hundreds of billions of ringgit....for the crooks, of course.

I believe even the nearby Port of Tanjong Pelepas will be affected by the project and there's nothing that can be done about it.

Now, look again at the map of this project, 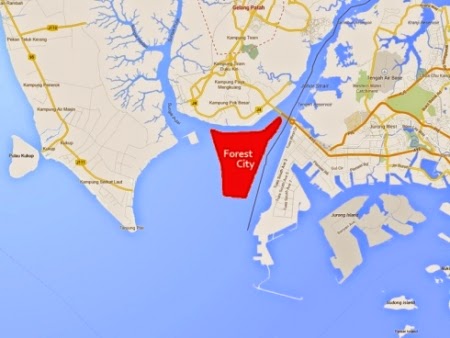 Do you seriously believe that the crooks are not going to do, or already had done something to get their hands on the land north of the project
site ?

"The blueprint of the project did not indicate any forms of land acquisition from the villagers. This includes land for the construction of an access road from Forest City which will pass by the villages."

Err, Khaled, which way will the roads to the Forest City will go through if not through those kampung north of the project site?

Since Khaled talked about blueprint, let us ask him about the hundreds of blueprints of Iskandar Malaysia?

What happened to those?

Were all those land converted to freehold status and sold to the mainland China companies part of the Iskandar Malaysia blueprints?

If you find it difficult to ask that question to Khaled because he is MB, then you can ask this guy, 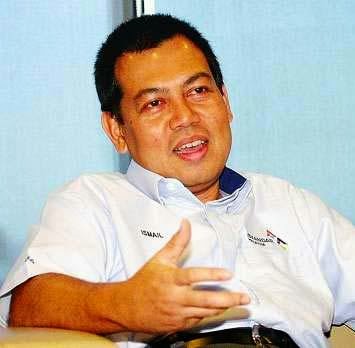 Datuk Mail is friendly and handsome. I am sure he will answer your questions truthfully.

Blueprints are bullshit, okay....well, at least in Johor, that is.

Anyway, as far as what I am doing, I am just trying to limit the damage done by highlighting these issues.

This is one of them,
Eight Malay villages worth one golf course in Johor

Of course the crooks involved will deny it and had in fact denied it.

What? Did you expect them to own up once people get to know about their dastardly plan? Don't be naive, okay.

But if by making some noise enabled me to change the mind of the crooks from turning some Malay kampung into a golf course, then I am glad.

At least that's mission accomplished....sorts of....

How long the fishermen kampung folks can resist the temptations of later attempts to buy their land is another matter.

After all, their source of livelihood will be gone soon due to all those reclamation works.

But that one will come later.