So, as customs dictate, I am wishing all Muslims, Selamat Hari Raya Korban.

May you all be blessed by Allah.

Hmmm... I do however wonder if that's the right way to do it.

Did Prophet Mohamad and his friends back then greeted each other the same way on such occasions?

You see, as I had previously wrote, my religious knowledge is rather limited.

I am actually ignorant about a lot of things related to my religion.

I also don't really ask questions when told to perform my religious obligations.

Instead, I just do so because I was told they were the right thing to do during religious classes which I attended when I was young.

Well, not all though.

For instance, I don't wear a tudung and I don't do a few other things which I find too difficult to follow.

They told me I am going to burn in hell because of it.

Allah going to burn me in hell because I don't cover my head? Why la?

I always have that question in my heart whenever someone told me I better wear a tudung.

But I rather not say it.

It will lead to an argument which I rather not have.

You can't win an argument with someone who believes that God is on her side.

I normally will just smile and say InsyaAllah, I will soon wear a tudung.

But seriously, when Prophet Mohamad spread the teachings of Islam, did he meant for all women to ultimately dress up like this? 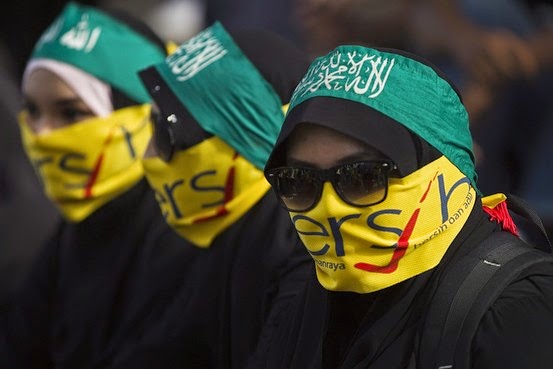 I can't comprehend it but as they said, Islam is about submission. So, I just follow whatever they say....whenever I can.

I rather not ask too many questions.

Just do what I can and try my best to be as good as I can.

That's how it is for me.

Anyway, I am now somewhere in the East Coast for the celebrations.

The traffic coming here was terrible, though.

The authorities really need to stop all those heavy vehicles from choking up the roads during celebration seasons.

I spend two hours stuck in traffic at Genting Sempah  because a trailer, most likely overweight, hogged one of the lane going uphill at 20km per hour.

Okay, the lady of the house is in the kitchen. She is cooking something very nice.

I can smell the fragrance of the lontong daun pisang from this room.

I better go now and help her with the cooking.

You all have a nice long weekend ya.
Posted by Annie at 09:51