The PKR headquarters today issued a statement on DS Anwar Ibrahim's nationwide road tour ahead of the final appeal of his sodomy conviction at Federal Court on Oct 28 and 29. 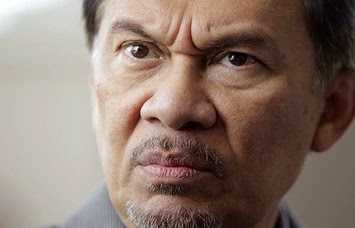 The road tour will start with a Deepavali function in Klang on Oct 21, followed by other functions in Penang, Kedah, Perak, Terengganu, Pahang, Malacca, Johor, and Selangor.

The climax of the "Himpunan Solidariti Bersama Datuk Seri Anwar Ibrahim" will be at Stadium Kelana Jaya on Oct 27.

It's an obvious attempt by Anwar to pre-empt the possibility of the Federal Court upholding the decision by the Court of Appeals which sentenced him to a five years imprisonment for sodomising his aide.

The Court of Appeals had in March overturned a lower court's decision which had acquitted him of the charge.

The road tour will be Anwar's attempt to whip up public support for him, which he hopes will damage the ruling Barisan Nasional and to a certain extent influence the court's decision.

It is the same strategy which he employed when he was sacked from his deputy prime minister post on Sept 2, 1998.

Anwar had then went on a whirl wind tour of the country to galvanize support for himself.

It triggered the Reformasi movement which resulted in a string of violent street protests in downtown KL before Anwar was arrested and jailed for abuse of power.

BN took a severe blow at the 1999 general election, with Malays' votes for the coalition being reduced to just about 37 per cent.

The Chinese community, spooked by the violent Reformasi protests which participants were overwhelmingly Malays, went all out to support BN, thus saving the coalition at the polls.

This time, Anwar is hoping for the same to happen again...except of course the part where the Chinese community's votes save BN.

It is however doubtful that he will get his wish.

I don't think that many young people are fanatical about Anwar now.

How many of them are willing to go to the streets just to defend him?

Are young DAP supporters willing to clash with the police over Anwar?

How about Pas people? Is it going to be a jihad to go to the streets to prevent Anwar from being jailed for committing sodomy?

The Pakatan people do not say it out loud but I think most of them are actually glad that Anwar may soon be out of the picture.

He is actually a liability to them now.

I had talked with many Pakatan supporters about Anwar and his political baggage, including his sexual exploits.

Most of them said it's not that they do not believe in those unsavory things BN people said about Anwar, but the overriding objective of getting rid of the BN government necessitate them to overlook all that.

In any debate I had with my Pakatan friends, the best way to silence them was by asking them whether they believe that it was Anwar who was featured in the sex tapes.

" Anwar can screw a donkey for all I care, but BN must be toppled," said a DAP friend once when I asked that question. And that ended the debate as we then laugh about other funnier things than the mental picture of an old man having sex with a donkey.

I actually believe that Pakatan will be stronger once someone younger and with less baggage such as Azmin Ali takes over the helm of PKR.

The Pakatan coalition actually has a number of capable young leaders from all three component parties of DAP, PKR and Pas.

BN leaders should in fact be more worried once these young people took over from the old Pakatan leaders.

I believe BN itself has less of such capable young leaders.

Umno in fact, only has two whom I can think of at national level - Khairy Jamaluddin and Mukhriz Mahathir.

So, I don't think BN should be too happy if Anwar goes to jail.

As for Anwar, it's the end of the road for him if he goes to prison.

By the time he came out of prison, the country's political dynamics will be very different from what it is today.

He will no longer be needed by Pakatan as they will by then have the young leaders fully entrenched at the top.

They are not likely to give up their position for a spent force that Anwar will be by then.

And the likelihood of these young Pakatan leaders at that time already occupying Putrajaya should not be totally dismissed if BN continues to flounder and fail to clean up its own act.

I don't think Prime Minister Azmin Ali will be willing to hand over the post to Anwar, no matter how much he love his mentor.

Whatever it is, Anwar should realize that this coming road show may likely be his last hurrah, and that it's the end of his dream of being the country's most powerful man.