I am now resting at this posh hotel room courtesy of a friend.

Yesterday morning I felt so stressed and unhappy that I decided to take a break from my routine.

As I had previously wrote, I am not an invincible superhero. I got problems like everyone else.

I was actually unsure where to go until a friend suggested for me to rest at this hotel.

My friend has a room here which he is not occupying and told me I can hang out there until I feel better.

I thought of forgetting everything and just rest.

However, another friend called in the afternoon and asked me if I had been reading the news.

"They whacked Najib, left, right, and centre for threatening the Chinese," he said.

Reluctantly, I checked the news and there they were at all the pro-Pakatan portals,

Be the PM for all, not just Barisan supporters, Najib told

The pro-Pakatan portals were having a field day, quoting Najib as saying this :

“I’d like to do more, maybe one day I can do more. But I also need the Chinese community to support BN. Come on. You have to do your part.

The angling of the stories were written in such a way that what Najib said sounded as if he was threatening the Chinese that they will not get any help from the government if they don't support BN.

From what I know of the prime minister, he is not the type who threaten people.

Does he look like a Malay gangster who has a habit of threatening Chinese? 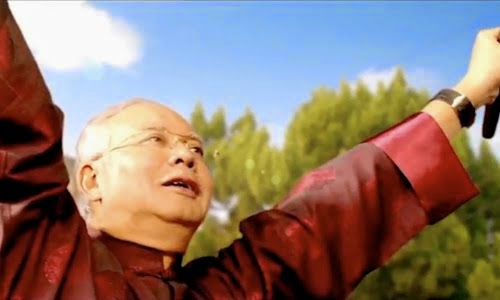 I think he is too much a gentlemen to do that.

That's the picture of him beating Chinese drums before last year's GE13 as part of efforts to show his sincerity to the Chinese community.

As I said, he tried very hard.

I really pity him, every time I see that picture.

Many Umno people these days even consider Najib as "lembik" because of it. You can read samples of that in the comments at my previous postings on the PM.

They even wish they can topple him for still pandering too much to demands by the Chinese who betrayed him in GE13.

So what actually happened at the MCA's AGM?

I called a friend at the PMO to find out and our conversation went like this:

Me: What the hell happened at the MCA AGM today? They are making your boss sounds like a gangster?

PMO guy: The bastards spin the PM's quote out of context la. You have to listen at how he said those words.

Me: How he said them?

PMO guy: He was actually pleading to the Chinese to support BN so that he could do more for them. He was not in any way threatening them. You have to listen to the tone in which he said those words.

Me: You all should advise him better la in the choice of words. Don't let all those Pakatan portals find room to twist the whole thing.

PMO guy: My boss was speaking off the cuff la.

Me: Argh!!! Come on la, don't tell me you all have no plan to prevent these sorts of thing.

PMO guy: We will discuss about it.

Okay, hopefully the PMO people will discuss the matter well and come out with a proper plan to prevent another public relation disaster like that.

They should know the pro-Pakatan media people who dominate the country's cyberspace are all ready to pounce on Najib at every opportunity.

As for the Umno/BN cyberwarriors.....well, I don't count on them to go and fight over these sorts of things.

They are after all totally outclassed by their Pakatan rivals, who have portals such as Malaysiakini and Malaysian Insider.

Are there any plan by BN cyberwar bosses to fight those Pakatan portals?

They don't even seem to bother.

It's more than one and a half years since GE13, yet BN still has no answer to those Pakatan portals.

He is being whacked by the Pakatan gang and also nowadays by many Umno people.

I wish he is getting better advise from his people.

The next general election is not that far away. Three years from now, the most.

Well, I am not sure why I am feeling that as Najib's people themselves seem confident. They are still busy running around doing I don't know what.

I wish they are worried too like I am.

If they are worried, at least they are in the position to do something about those worries.

Myself, if I am worried, I can only just go somewhere quite like in this hotel room and sleep.

Hopefully, tomorrow no one calls me, telling such disturbing news again.