Not yet giving up hope on Najib

There has been quite a number of comments in my previous posts which suggested for PM DS Najib Razak to be replaced.

My question about it is this : What happened if Najib's replacement also fails?

And I believe, fails he likely will be.

Because, in my opinion, when you topple a leader who had tried hard but didn't manage to meet your expectations, you will likely cause his replacement to also fails.

It's because you will put the bar too high for the replacement to achieve.

That was exactly the case when Najib took over from Tun Abdullah Ahmad Badawi, the so-called sleepy head PM.

BN supporters, or to be more accurate, Umno leaders, members and supporters, expected Najib to turn back the tide following the losses of GE12.

But the results of GE13 was similarly dismal, or in fact even worse than the previous general election in term of number of seats won by BN.

But one thing people tend to forget was that in GE12, there was yet a Chinese tsunami like in GE13.

That was why Najib looked as if he had failed in the first general election that he led BN.

The Chinese negative sentiments toward BN was then at an all time high.

Considering that, I never really blame Najib for trying hard, or maybe trying too hard, to win back the Chinese voters.

Unfortunately, the plan didn't work out at all.

The Chinese tsunami did happen, and there was nothing anybody can do about it.

Should we blame Najib alone then for that?

Everyone in BN should be blamed for it, particularly MCA and Gerakan whose members mostly voted for Pakatan.

Yes, those obnoxious, arrogant and stupid among the Umno leaders should also be blamed too.

Now, some blamed Najib for what they described as still pandering too much to the Chinese community despite being conned by them during GE13.

But let me ask you this: What other choice that Najib has?

Yes, only about 10 per cent of the Chinese voters supported BN in GE13, but that small percentage was actually crucial to be maintained or even expended.

And the Chinese community is here to stay in this country, no matter what you think of them.

You cannot throw them into the sea or tell them to balk Tongsan, okay.

I don't believe that Najib is doing his best to win the Chinese support at the expense of the Malays and Bumiputera as accused by his detractors.

Najib is not dumb.

Okay, I don't agree with some of his plans and methods, but that does not mean I want him out of office.

Not even Tun Dr Mahathir Mohamad.

When we criticize our leaders, it's because we want them to be better.

We want them to realize that we are not happy with what they are doing.

We should at the same time give them a chance to mend their ways.

That, I believe should be the way, unless the leader's foolish ways had reached a point of no return.

In Najib's case, I think he is still listening to our complaints and is trying to do the right thing.

Some of you may disagree with me and I accept that,  but I have seen things that Najib did to correct things which have gone wrong...of course in his own subtle ways.

In the case of problems in Johor, I believe he tried, and is still trying.

For instance, the recent criticisms by mainstream media, which almost directly putting the blame on the Johor palace and MB DS Mohamed Khaled Nordin's administration for the excesses over land matters in the State.

That I believe was initiated with the green light from Najib.

Otherwise, newspapers like Utusan and NST wouldn't be so daring in matters related to conduct of Malay Rulers.

I know for a fact that a close Najib's aide was very upset over what is happening in Johor and had conveyed the PM's wish for the nonsense to be stopped to his other influential friends.

These are among the things which make me believe that it's not yet time for Umno to topple another of its leader.

Anyway, how many of its leaders Umno needs to topple before it gets what it wants?

For me, criticizing Najib is okay.

Constructive criticisms help a leader to check himself from doing the wrong things.

I am doing it too.

You may think that I dare to do that because this is an anonymous blog, but let me tell you that some of the top PMO people know who I am.

Yet still, they have not try to stop me from criticizing the administration.

They know that my criticism was not personal or malicious, and that it was meant for the administration to do better.

They appear able to listen and accept my criticisms for now.

That's why I believe there is still hope with Najib.

After all, the guy is still trying and he is yet, as far as I am concerned, a gone case.

Hopefully, things will improve in the coming days.

Hopefully, at the coming Umno general assembly next month, Najib will be able to convince everyone that he is doing the right things and answer all those difficult questions about the conduct of his administration. 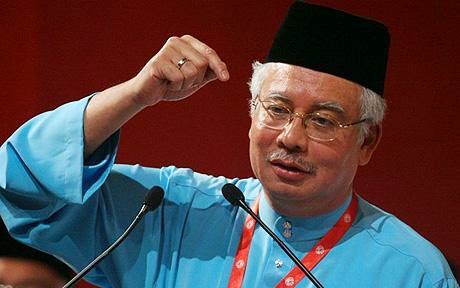 On top of that, I hope Najib will be able to convince myself and everyone else that Umno and its BN coalition partners have the right plan and are well on their way to prepare themselves for the next general election three years down the road.
Posted by Annie at 07:40