Najib's Bumiputera initiatives may still be the game changer

Datuk Najib's unveiling of his Bumiputera Economic Agenda yesterday seems to be greeted with mixed feelings.

Some were elated, others cautious, while not a few dismissed it as inconsequential.

Here is a review of it by a blogger who just a few days ago told me that she had given up on Datuk Najib,

I categorize that one as lukewarm.

Well, at least she is still considering not to totally abandon the ship.

My posting on the matter yesterday

generated over 50 comments in less than 24 hours, which is quite a lot for my insignificant anonymous blog. It also attracted over 2,000 page views which was not bad for a posting on a Saturday.

I believe many had sit up to listen to what Datuk Najib has to offer the Bumiputera, who had saved his government in GE13. 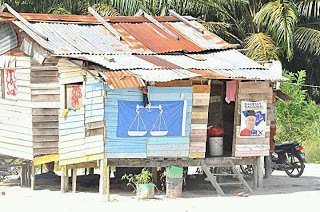 I believe the initiative had also made the Pakatan people worried.

They made up more than half of those who commented at my posting yesterday, mostly trying to run the whole thing down.

It has been quite a while since they came to my blog in large numbers like that. Well, maybe they came before but didn't bother to leave comments as they feel that they are winning with people like me getting fed up with Datuk Najib and the rest of the Umno and BN leadership.

Now, the initiative by Datuk Najib may not be good enough for some and was even described as a gimmick for the coming Umno party polls. But for me, at least it's a good turn in the right direction.

It's now a matter of implementation. It needs to be done fast. People are watching and they want to see immediate results.

Hopefully Datuk Najib is aware of this.

Mere words and promises are just not good enough.

I'm still hopeful. Despite the others' skepticism, I believe the initiative, if implemented properly, can still be the game changer for GE14 four years from now.

Now, if only Umno could replace the likes of Shahrizat and other tainted people so that it could erase further the negative perceptions.....well, I can only hope.
Posted by Annie at 09:41