Good choice on Fulcrum and Flanker

This is just in at NST SMS Alert,

NST 08/09: There are no plans to replace the country's fleet of MIG-29 and Sukhoi fighter jets with newer models soon, says Defence Minister. 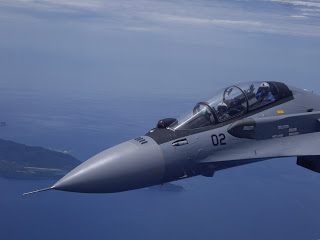 I believe this was a good news and Defence Minister DS Hishammuddin Hussein who is trailing in my Umno vice-president poll may score some points for it.

Malaysia will save billions of ringgit if it maintains its fleets of Russian-made fighters. For instance, half a squadron of MIG-29s were estimated to cost just about the same as a single

which had been touted as their possible replacement.

Some may disagree, but I think the

are still good enough for now to either defend our airspace or strike at the country's enemies from the air.

Both are still the best Russian fighters of their respective class and could match their Western-made counterparts.

The MIG-29 was the Russian answer to the US'

which is a fighter currently deployed by the Singapore Air Force.
The Royal Malaysian Air Force's MIG-29s based in Kuantan were mainly interceptors primarily assigned to shoot down intruders of our airspace.

The bigger Su-30MKM is a more advance derivative of the original Su-27, which was originally designed to rival the US'

It should however be noted that the F-22s were not for the export market and even the US Air Force found them too expensive to maintain.

So, the US' main air-superiority fighters are still the F-15s which RMAF's SU30MKMs are more than capable of matching.

Here is a video which illustrates the same level of capabilities of US' and Malaysia's main combat aircrafts,