Getting used to living life without subsidies

The biggest local story of today is probably this,

RON95 petrol and diesel price up 20 sen from midnight tonight

I think almost everyone will be affected by it.

For the first time, I actually took a drive just to get to a petrol station to fill up my car's almost empty tank earlier this evening.

The queues at the petrol station near my home were quite long that it stretched to the road shoulder at its entry. 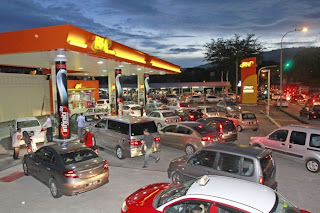 I drove to another petrol station about 8km away which queues were shorter.

I'm quite sure the Pakatan people are jumping at the opportunity to whack the government over this matter.

After all, DS Anwar Ibrahim had promised that he would reduce the price of fuel should he was elected as prime minister in the GE13. Unfortunately for him and his supporters, that did not happen.

But then again, was there any guarantee that everything will continue to be cheap if Pakatan comes to power?

I don't think so. They can promise the moon and the stars but fulfilling those promises would be a different matter altogether.

Anyway, for how long must we continue to live on government's subsidies?

And then, there are those who insisted that only Malaysians of certain races being the recipients of such subsidies. What an irony, isn't it?

Sometimes it irks me that those complaining the most about everything are those who are actually being among the most well off.

For instance, I don't think someone who wears branded items and regularly eats at fancy restaurants should complain too much about a bit more increase in prices of things.

Well, I know of someone whose five year old child wears Nike sneakers priced at almost RM200, who loves to bitch and blame the government about having to pay a bit more for essential items.

And some of the supposedly poor people living in squatter houses but has a car and Astro at home, I don't think they too should complain too much.

Honestly, I feel unhappy too about having to pay more for everything, but in the case of the government having to cut down on subsidies, I think I have to agree with the move.

We shouldn't continue to expect of living a life beyond our means at the expense of the government's ability to do more for the country as a whole.
Posted by Annie at 22:57