The NST today published an interview with the guy whom I think is the only one who could rejuvenate Umno. 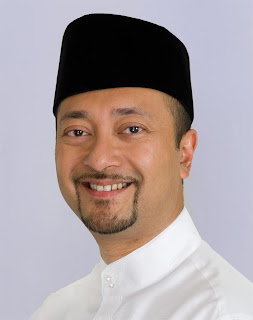 Here are excerpts of the interview,

Question: This next question is likely on everybody's mind. What can we expect from your position in the party election?
Answer: I'm running out of time before nomination day. I must admit that I'm still in two minds about this matter. I know I am going to contest but in which position, I haven't decided. I have taken the opportunity to talk to as many people as possible and I must say that the views I received vary.
The most ideal situation is when the leadership's mind is synchronised with the masses. My worry is what if we are not. I am loyal to the party and I hope no one will question that. Whatever I do, I always bear that in mind... whether I'm doing it for the good of the party. I never put self-interest above the party. I read some comments in blogs which accuse me of having it easy all the time. You know, like he's been secured, protected and given the easy path all the way.
Well, my first attempt to contest was as the Youth chief of Kubang Pasu and I lost by nine votes despite my father having been the division chief there for 35 years. I won with the highest number of votes in the Youth exco but lost when I contested the chief post, where I came in third among three contenders. This time around, at the general election, I chose to contest at a seat that we had previously lost. So, how could this be a grand design for me to reach a higher level?
Don't you think that if I had such aspirations, I should have gone and contested in places like Kuah or Jitra, which were sure bets?
So, I think it's clear that I took calculated risks as I knew what I was doing. Not many understood why I was taking chances as even my father (former prime minister Tun Dr Mahathir Mohamad) was not so keen about me standing at state level, and worst still, at a seat where we have lost before.
Even the prime minister was surprised that I said Air Hitam when he asked where I wanted to stand. Of all places, reports were that Air Hitam was not so safe as the votes there swinged a lot and there were also many who tended to vote for Pas. But I was comfortable and confident, and I felt that if I was there to win back the state, I myself must contribute a seat. What's the point of me standing in a safe seat and expect BN to win the state back?
That's why I think I am okay with taking risks and I have a proven track record in that regard. I have absolutely no qualms about being in difficult situations and that it's all for the party.
Question: A lot of people see you as representing the more youthful side of Umno, despite yourself being almost 50 years old. How do you feel about that and in what way do you think you can contribute to rejuvenating the party?
Answer: I don't know whether it's really about being young or old. I find that at some point or another, the general perception is that the party may veer from its original cause and that a lot of people, many of them young people, want Umno to go back to its original values. So, because this set of people who want to see a revived Umno tend to be younger, that's why they say its a generational thing.
I think it's not really so. A lot of things have happened in the party, some are good and quite a lot that are not so great which damaged the party's reputation and image. I've made it at least a personal mission to clean up the party's image and I hope others will be with me. That's why, whenever I have the chance, I talk about integrity, about being professional, about being work oriented and having the right values as well as being grounded in Islam.
All these things, everyone knows are good for the party.
Coincidently, a lot of young people I talked to share the same feelings. Many of them told me that they voted for BN and Umno mainly because they didn't like the other guys. That is not good enough. I don't want them to vote for us just because they don't like the opposition. I want them to vote for us because they trust us and they believe in us and they want to be with us in the true sense. Well, how do you feel if someone (you love) says I love you because I don't like the other guy?
This old adage about the devil you know, that can't be it. So, I hope more in the party will champion this issue. Just look at whenever we go into an election or by-election, we can see how the other side behaves. They act like ruffians. They accuse us of practising graft and abuse of power. I don't think we addressed that enough and a lot of young people believe those accusations.
We shouldn't assume that just because there is no evidence, the young people shouldn't believe those accusations. We haven't done enough to exonerate ourselves from that. And do bear in mind that those guys who accuse us, they actually don't even have the moral high ground to make such accusations. And yet, their unsubstantiated allegations form misperceptions about Umno as a whole. I hope to clean up the party's reputation and image.


For the rest of the interview, please click on this link